My tuk-tuk driver in Siem Reap 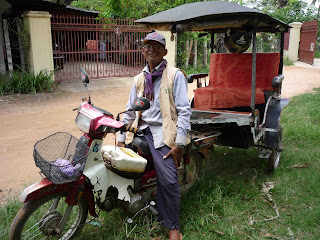 This is Phoen (pronounced "Pern"), my tuk-tuk driver here in Siem Reap. He's an old man who speaks no English, so that is why I choose his tuk-tuk over others. The other drivers have a better chance at earning money because they speak English. Phoen lives with his second wife and their four children who all attend school. He was the one who built the shelves and tables in the Bloom shop. We went shopping for planks of wood which he then sawed and nailed together. He's a good guy and I would recommend him but I know how important it is for tourists to have an English speaking driver. I've tried teaching Phoen English but he does not seem interested.

In Phnom Penh I use Sophal--a tuk-tuk driver I've known for 2 years now. He's like a friend, someone I can rely on. My mom always said "chu wai kao peng you" ("you need to count on your friends when you are away from home"). You can find Sophal's pic and phone number, if you want to hire him, in a blog entry way back in 2006. He's very honest and I can vouch for him.
Posted by Diana Saw at 6:00 pm