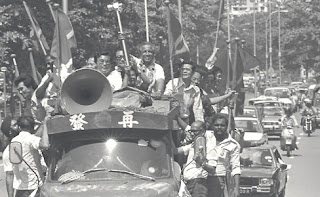 (JB Jeyaretnam on a victory tour at the Anson by-elections in 1981.)

I was very upset to hear of the death of JB Jeyaretnam, Singapore's first opposition party candidate to be elected MP, 16 years after Singapore gained independence. JBJ was 82 years old and passed away on the 30th Sept.

I feel sad for Singapore because we have lost someone who was committed, right to the very end, to making Singapore a better, fairer, more just place for us all. JBJ fought what must have felt at many, many times a lonely battle. Many people say Singaporeans deserve the government we get because we lack the courage or desire or conviction to demand more. As the New York Times puts it, "As a price for their affluence, most people there accept restrictions on civil liberties and free speech. Few have called for fundamental change, as Mr. Jeyaretnam did." Clearly JBJ thought Singaporeans deserved better.

I am also sad because I think there is no one else like JBJ, no one in the opposition with his stature, because he was there from the start, challenging the People's Action Party in repeated attempts since the 1970s, to get some semblance of checks and balances in place. It is also much more difficult for opposition party candidates to gain that kind of stature today, because the odds are more heavily stacked against them.

In the early years on Singapore's independence, before power was concentrated in one party, there was much less gerrymandering.

The PAP will celebrate 50 uninterrupted years in power next year, in 2009, and is the model for the Cambodian People's Party (CPP), headed by Prime Minister Hun Sen, which also aims to establish a one-party state. Singapore is also the model for Putin's Russia:

The Singapore government takes a less crude approach in dealing with dissidents--it does not put a bullet through your head, but sues you for all you're worth. In the case of JBJ, he spent more than 900,000 US dollars paying off damages awarded to PAP leaders and had to sell off his house in Singapore, settling in his later years in Malaysia's Johor Bahru. A lesser man would have given up, giving excuses that Singaporeans are not worth it, that he'd work so hard for his money and for his family etc etc.

Despite attempts by the Singapore government and its media's at dismissing JBJ's contributions, many Singaporeans know what he was trying to achieve and--secretly or not--cheered him on. His son talks about the numerous occasions when taxi drivers (who some say are society's barometer) refused to accept payment for rides.

His death was covered by The New York Times and AFP.

And here is the Singapore Prime Minister's Letter of Condolence:

CONDOLENCE LETTER FROM PRIME MINISTER LEE HSIEN LOONG ON DEMISE OF JB JEYARETNAM
30 September 2008
Mr Kenneth Jeyaretnam
Mr Philip Jeyaretnam
Dear Kenneth and Philip Jeyaretnam
I was sad to learn that your father, Mr Joshua Benjamin Jeyaretnam, has passed away.
Mr JB Jeyaretnam was a Member of Parliament for Anson constituency from 1981 till 1986, and a Non-Constituency Member of Parliament from 1997 till 2001. He used to engage in heated debates in the House. Perhaps it was because he and the PAP never saw eye to eye on any major political issue and he sought by all means to demolish the PAP and our system of government. Unfortunately, this helped neither to build up a constructive opposition nor our Parliamentary tradition. Nevertheless, one had to respect Mr JB Jeyaretnam’s dogged tenacity to be active in politics at his age.
However, our differences were not personal. In 1993, one of you (Kenneth) wrote to Mr Goh Chok Tong, who was then Prime Minister, to say that you found employers in Singapore reluctant to offer you a job, and your only explanation was that the employers felt the authorities would not welcome your employment because of your name. Mr Goh replied with a letter which could be shown to prospective employers, to say that the government did not hold anything against you, and that employers should evaluate you fairly on your own merits, like any other candidate, because Singapore needed every talented person that it could find. Mr Goh had previously made the same point to your brother Philip, whom he had invited to lunch. I am therefore happy that both of you have established yourselves in Singapore.
Please accept my deepest condolences.
Yours sincerely
Lee Hsien Loong

You can read more about JBJ here:Wikipedia and on politics.sgforums.com.
Posted by Diana Saw at 9:23 pm