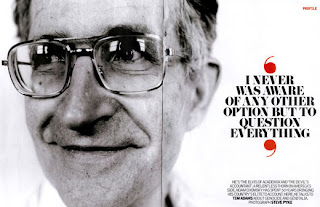 (Photo: The Observer) My friend Marie told me about this interviewed aired today (UK time). Marie and I did our MA theses together at university in Singapore and I almost wrote mine on Chomsky, specifically trying to examine the link between his theory of language with his politics. (There is no link--I'm pretty sure Chomsky's politics would be the same regardless of his theory of language).

(As a humourous aside, there was a chimpanzee called Nim Chimpsky who learnt 125 signs. Nim Chimsky died of a heart attack in 2000 at age 26.)

I did not do the thesis on Chomsky in the end, but on conservative English philosopher Michael Oakeshott (1901–1990). Anyway, that was a long time ago, but Chomsky has always remained one of my heroes. He's just so disciplined. I remember being so impressed reading his books because this is one person who spends hours and hours reading and reading in pursuit of the truth. And speaking out for it.

Noam Chomsky is one of the great thinkers of our times.

Now aged 80 he tells Carrie Gracie how his ideas were shaped in particular by the Great Depression, the Spanish Revolution and working at his uncle's news-stand in New York.

And he takes her on a whistle-stop tour of linguistics and American politics and explains why he admires Bolivia."
Posted by Diana Saw at 12:58 am