US ban on Cambodian adoptions 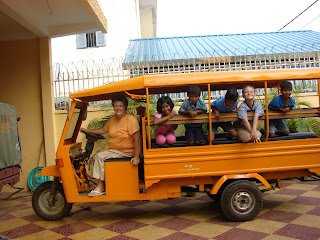 This is Kerri Evans and her five children. Kerri is my best friend in Cambodia and is an institution in Phnom Penh. Everyone knows about this Western lady with her bright yellow tuk tuk. Everytime we go out on her tuk tuk, Cambodians will point and stare and laugh. It amuses them no end that a Westerner, and a woman at that, should go around town driving a tuk tuk. Some tuk tuk drivers at the Russian Market even joke and ask her how much for a ride!

Kerri is from the US and has been living in Phnom Penh for the past three years. She came to Cambodia three years ago to find the biological sister of her already adopted Cambodian son, Kameron. Chenda is the sister and she was found working as a domestic helper for a relative. Later on, Kerri noticed a boy who used to play by himself in a box at the Russian Market (hence his early nickname "Box Boy") and took him in too. The family calls him Noah now and I have personally seen how Noah has changed from a malnourished little boy to a playful, confident child who speaks excellent American English.

Or this one on Angelina Jolie's child Maddox by The Sydney Morning Herald.

As the first article notes, there are people who try to adopt legitimately, but are stranded in Cambodia as the US government has, since 2001, suspended visas for adopted Cambodian children."The suspension... will last as long as it takes to ensure that the adoption system in Cambodia is not systematically corrupt, and private aid agencies and Cambodians say that could a be long time."

How can you change Cambodia's corrupt system? It's very difficult and complex, requiring effort on many, many fronts, and it is certainly not something the US government can will to happen. In the meantime, US citizens like Kerri who genuinely want to provide a loving home for unwanted, neglected and bullied Cambodian children cannot do so. Kerri has lived in Cambodia for the past three years with her kids, demonstrating her commitment to them. All this time, she has been living apart from her husband John, who is in Arkansas where he has a job that provides for the family. John visits his family regularly but they have not been able to live together as a family for three years now.

I don't pretend to know the legalities of US adoption of Cambodian children, so I would be more than happy to hear from people familiar with the situation. Let me know if you can figure out these seemingly contradictory US policies.

On a final note, I just finished reading "The Kite Runner" by Khaled Hossenini - a wonderful book- and there is the same situation re adoptions with Afghanistan, with the tragic result that many victimised Afghan children are unable to escape their personal hell-holes.

Of course I understand the US government is trying to do the right thing with the ban, because it does not want to encourage child trafficking. But I am unsure a blanket ban is the way to go. The US government has exactly the same way of dealing with rogue nations - just slap on an economic embargo, a boycott, which punishes innocent civilians, often more than their evil, corrupt leaders (like the boycott of Iraq which did nothing to remove Saddam Hussein, or the embargo on Burma, which is doing nothing to lessen the grip of its military dictatorship).

Just as others see how embargoes hurt ordinary people, I keep thinking of the adoption ban hurting children who are genuine candidates for adoption. I think of all the abused children who could have a shot at a better life, and the families who want to offer them that chance, and how many lives are wasted and worse--tortured, as in the case of sexually abused Afghan or Khmer kids--because of some bureaucratic decision. Surely the right thing to do is to decide on a case-by-case basis, when what is at stake is a child's life (and I mean life as in its daily living, not just life as opposed to death, which seems a kinder alternative when you know what some of these children live through).
Posted by Diana Saw at 11:55 am