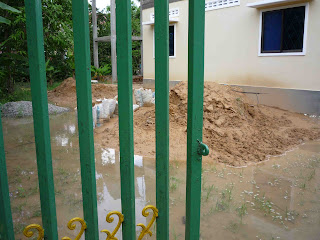 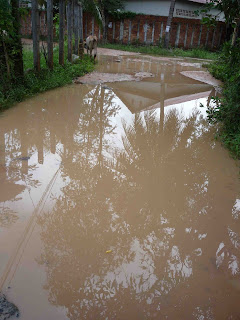 A Western man was just pacing outside the Bloom shop here, on his mobile and telling his friend about the floods here in Siem Reap. He said he has never seen anything like this in previous years. And you know why? Human development.

After yesterday's heavy rain which flooded roads here, I saw three big trucks with sand going past our house. Cambodians who can afford it keep adding sand in order to elevate their land, without considering what they are doing to their surroundings. I took these photos to show what is happening. When the house pictured adds the sand and elevates its land, where do you think the water will run to? Down the street of course, adding to that lake (puddle does not describe it) which is already just outside to the left of its entrance (you can see the owner has already dug a little drain for the water to flow out of his house into the street).

So the puddles just keep changing places. House A is elevated, leaving the water to run to neighbours B and C. B and C then add sand and the water is pushed further along. The problem will never be solved until they start digging proper drains (and even then, it won't be solved, given the Cambodian habit of littering, causing clogged drains).
Posted by Diana Saw at 2:03 pm