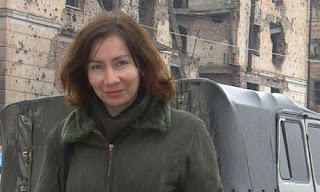 I feel I have to write about Natalia Estemirova, Chechnya's voice of conscience, because I do not want her death to be in vain and this is all I can do. I would also like Cambodians to take courage in the fact that there are people everywhere who are trying to do their bit (some more than their bit) for justice.

[Some background on Chechnya: When the Soviet Union broke up in 1991, Chechnya tried to gain independence from Russia. There are four phases to date: the "Chechen revolution" and Dzhokhar Dudaev's rule (1991-1994); the first Chechen war (1994-1996); Chechenya's quasi-independence (1996-1999); and finally the second Chechen war that began in 1999 and continues until now. Despite the fact that the Kremlin has taken certain measures to put an end to the conflict in the republic, the war is growing increasingly violent.]

On 15 July, Natalia Estemirova was was dragged into an unmarked white Lada, screaming vainly for help, as she walked out of her house. She was later found with a bruised face and four bullet holes, two in the chest and two in the head.

Ever since 2000, amidst the second Chechen war, the single mother has worked for the Russian human rights group Memorial. She worked tirelessly to uncover the brutal repression of Chechens under Ramzan Kadyrov, the region's thuggish young president. Kadyrov is the son of Chechnya's former leader, who was handpicked by the Kremlim.

She was such a force to be reckoned with, at one time, the Chechen president offered Estemirova a position as the head of a civil society advisory commission for the city of Grozny. She accepted but did not stop speaking out for her people, and did not stop writing reports for Memorial either. She wrote reports documenting about 50 abducted civilians this year, which many locals blamed on forces loyal to Kadyrov. According to Oleg Orlov, head of Memorial, Kadyrov told Estemirova: "Yes, my hands are up to the elbows in blood. And I am not ashamed of that. I will kill and kill bad people."

Memorial was so worried for her safety they wanted her away from Chechnya, but Estemirova called every day to say: "Something has to be done."

Sadly, her killers will most likely never be brought to justice. Estemirova was just the latest human-rights campaigner to be gunned down in Putin's Russia. Others include the journalist Anna Politkovskaya and lawyer Stanislav Markelov who was gunned down with journalist Anastasia Baburova.

Read more on Natalia Estemirova on Foreign Policy's "And then there were none" and Amnesty International's campaign.
Posted by Diana Saw at 12:02 pm