My tuk-tuk driver in Siem Reap 2 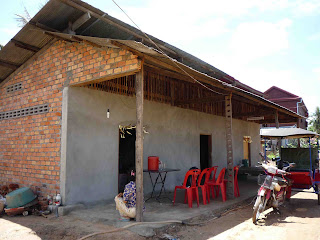 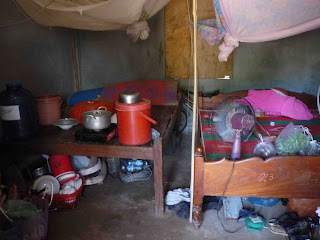 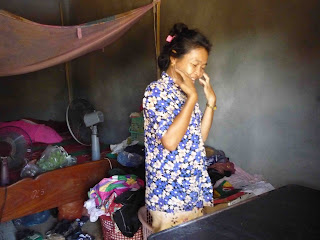 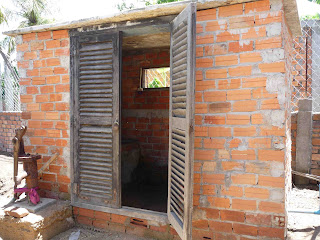 I've written about Phern, my tuktuk driver here in Siem Reap. He is 54 and speaks very little English. I mentioned in my previous post that is the reason why I use his tuk tuk. It is almost impossible for him to compete with the younger tuk tuk drivers who speak English. They are the ones who get the tourists and the big tips.

Whenever friends visit, I always suggest they help him out, because he is a sweet old man and is very honest. Recently he told me because of the low season he gets sometimes only 2000 riels (50 cents) a day. Phern has 4 children so it is hard for him. I try to help him out by giving him odd jobs. More recently, I asked his wife to try making necklaces out of recycled paper which I can buy to sell in the Bloom shop.

Anyway I visited Phern and his family recently. This is his home, a single room for which he pays 50,000 riels (USD12.50) a month. His place is only one room, with one door, not the whole building. It is the one with the table and the plastic chairs, which Phern's wife (pictured) took out for me, my aunt and her friend. I had bought them different varieties of fruit and they insisted we have some (of course we felt shy). Cambodians are very hospitable. Even if they have nothing in the house, you can be sure they will offer you at least water.

You can see in the second photo his home consists of 2 beds, one for the parents and the other for the 4 kids. He has a gas stove which is kept on the bed during the day as the wife prepares the day's meals. At night it is put on the floor to make space on the bed. The red bucket on the bed contains drinking water. Underneath the bed in a basket are plates and bowls and cooking utensils. Clothes are put in baskets (behind Phern's wife in the photo).

The house is unbearably hot during the day because of the zinc roof, so the family usually sits outside the door. The shared toilet, the one made out of bricks, is used by three families, so 10-12 people. Phern is showing my aunt the chicken coop in the next photo.

My aunt and her friend were quite affected by the visit. They were dismayed at the living conditions. I explained that as far as Cambodians go, Phern is actually ok. He has a concrete house, which means the family is protected from the monsoon rains. They also have mosquito nets and access to a toilet and running water. It is hard for Singaporeans to imagine anything worse. My aunt says even in the 50s in Singapore, people were not so badly off.

The last one photo shows firewood. In case you think it is shared--it is not. The wood all belongs to the landlord, who sits on a huge wooden double storeyed house in the same compound. I wanted to take a photo of his house, but his wife who was sitting under the house (it is raised on stilts) was eyeing me suspiciously. 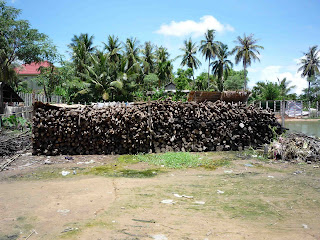 I will be going to Siem Reap next month. It would have been nice if he could speak even a little English so I could hire him as our tuktuk driver... He and his wife seems like good people. Even if I don't know them, I want to thank you for helping them. You are a good person. More power to you and your advocacies.

Hey MJ, thanks for the kind words. Hope to see you when you get to Siem Reap next month! Look for me at the Bloom shop in between Warehouse Pub and Laundry Bar. Have a great trip coming here!

Based on your information, I agree with you. It's hard for him to compete the others.I need further info on price list and contact person. I will be going to Siem Reap on August. Thank you in advance

Hi Adin, if you would like to employ Phern, I will have to contact him for you as he speaks very little English. Drop me an email (dianassy@yahoo.com) with your holiday info and I'll get him to pick you up. He charges very fair prices.

I visited Siem Reap 2 years ago and met a fantastic Tuk-Tuk driver called Tee Tee. He was an extremely good driver, honest and informative, telling me about the history of Cambodia and the temples. He took me to see some amazing places such as, The floating village, floating forest, the Temples and then to some amazing places away from the usual tourist spots. If you are looking for a driver who is trust worthy, kind, speaks good English (amongst other languages!), full of smiles and nothing is too much trouble for you. Tee Tee's mobile number is 00855 12582204 or www.experiencesiemreap.com. He will also pick you up when you arrive in Siem Reap.

It's a beautiful place! Have fun.