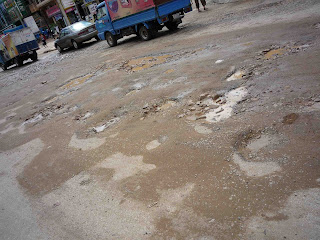 The rain caused many potholes which were a source of problem when there were floods. People on motobikes and bicycles especially fell into the potholes and got stuck or toppled. 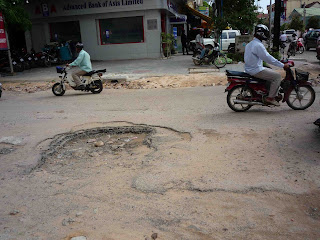 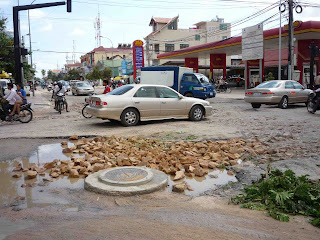 This is what is done to fill up the potholes - throw a pile of rocks on the hole. I suppose later a big roller will flatten the rocks. 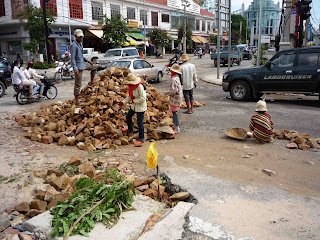 I saw some workers throwing some rocks away from the pile. They were spreading the rocks on the road for a roller to flatten them later. 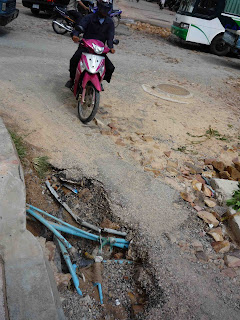 Exposed piping after the rain and flooding. See, if they had done the roads properly the first time around, they would not have to do this with the rocks now. I'm guessing there was not enough cement or tar or whatever during the construction of the roads. I'm also guessing this was due to corrupt contractors. And one should point out all over the world (not just Cambodia) there are corrupt contractors who mix in more sand than cement thus making lousy and unsafe structures. Structures made with spit we sometimes joke.
Posted by Diana Saw at 7:50 pm

Your blog has been a great resource for those of us about to arrive in SR. Thanks! I can't wait to come check out your shop and I need a new courier style bag!

See you next week.

My pleasure angkortuktuk, I hope the blog has helped people better plan their trips to Siem Reap. See you!
Diana