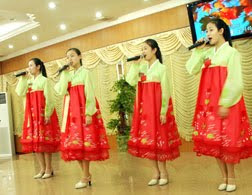 I noticed a spike in readers visiting my blog post Pyongyang restaurant - about our April 2007 visit to the restaurant in Phnom Penh. Curious.

So I googled and lo and behold, Slate just published a an article on the same restaurant (now in a different location, since the restaurant has moved - but it is still on Monivorng if I am not wrong). I did notice Siem Reap's Pyongyang restaurant had closed last year and Slate offers and explanation:

"A year ago, the Pyongyang restaurants in Cambodia and Thailand suddenly closed their doors, only to reopen again after a six-month hiatus. [Bertil Lintner, author of Great Leader, Dear Leader: Demystifying North Korean Under the Kim Clan] cited an Asian diplomat in Bangkok saying the restaurants, like all "capitalist" enterprises, were hit hard by the global economic crisis, but locals familiar with the establishment in Phnom Penh offered another explanation. One worker at a nearby business said Pyongyang closed after a dispute with a Cambodian customer who tried to take one of its North Korean waitresses out for "drinks" after dinner."


I would not be surprised, especially if that customer was a powerful "niak thom" (literally "big person").

Read full article here. PS: Photo-taking is supposedly prohibited at the restaurant but give credit to Slate for this one!
Posted by Diana Saw at 3:59 pm

We went here after the last barcamp in PP. The one in BKK closed down too. We did take some pictures and videos last year and as far as I remember the girls were happy to talk to us about their hometown and things Korean in general.

thanks for sharing Preetam!

Had a good time here last night. Waitress helpful on ordering. Ignored the dog meat on the menu but great kimshi, beef, and shrimp. Could not work out if smoking was allowed or not allowed however several men kept smoking. The waitresses asked them not to but a couple of them continued. Si, if smoke bothers you, choose your table carefully.