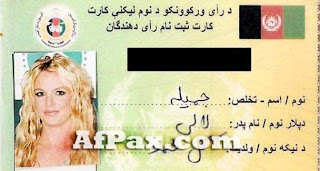 Photo of Britney Spears being used to register a voting card in Afghanistan. "One Afghan man in a village not far from Kabul had a sackful of cards buried by a stream at the back of his house, for sale to anyone who asked — but he’d prefer if they were used to vote for President Hamid Karzai". Reuters via dawn.com.

And I just read this from The Economist:

"Across Kabul, turnout was sluggish. But at Haji Janat Gul the lack of voters had not dented the tally of votes. Only an hour after voting began, 6,000 had been cast. Yet not a voter was in sight. Staff insisted that the 6,000 had all come at 7am, when polls opened: “The Taliban said that they would cut off the fingers of people voting so they came early.”

This was impossible. Typically it takes four minutes to vote. For 6,000 to have voted in an hour at the 12 ballot boxes, they would have had an average of seven seconds each. The Electoral Complaints Commission later received allegations that the ballot boxes had been stuffed for President Hamid Karzai before polls opened, at the instigation of a local MP and tribal leader." ... Some Western officials reckon 20% of votes nationally may be fraudulent.

It makes you wonder about the first elections in Cambodia after many years of war. It was held in 1993 under the auspices of UNTAC (UN Transitional Authority in Cambodia).

Some people claim more than 90% of the people registered to vote. Here is one which says "The process was launched in October 1992 and concluded in March 1993 [so in 5 months] when 4,764,430 Cambodians, or over 96% of the eligible population, had registered to vote." Inter-parliamentary Union.

People say it is testament to the courage of the Cambodian people who want to have a say in restoring peace and democracy in their country. I don't want to take anything away from the Khmers who actually turned up to vote, but 96% registered voting just seems to me to be incredibly high. It is more than likely if Cambodia's 1993 elections was like Afghanistan, where one person could, and did, register numerous voting cards on behalf of his favoured party.

Anyway, I found this interesting organisation: International Institute for Democracy and Electoral Assistance (IDEA) which produced the following infographics. It says Cambodia's last three parliamentary elections since 1993 were "Not Free". 1993's was "Partly Free", presumably because there were UN observers. 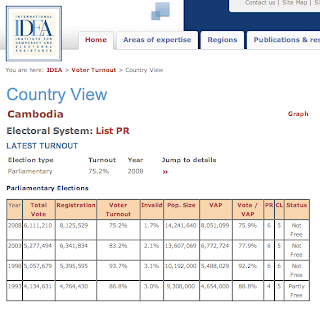 But take heart Cambodians, Singapore's elections are not any better. Out of the 10 elections analysed, only 3 were rated "Partly Free by IDEA. This is the "lek mui" ("number one") Asian country you always refer to. 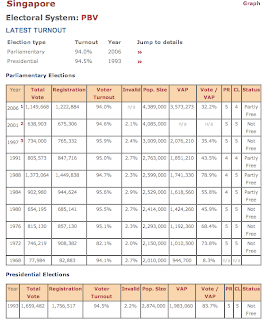