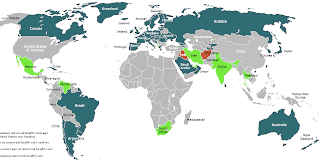 Universal healthcare is simply health care coverage for all eligible residents of a political region where costs are borne in the majority by government-funded programs. I am not sure why Singapore is not coloured dark green though.
Posted by Diana Saw at 2:14 pm

Hmm it seems New Zealand has fallen off this 'world' map!

Oops! Sorry that was my mistake. I could not get the whole pic on the one shot. I've changed the image to show NZ and wrote down the legend separately. Thanks for pointing out, Tanya. Cheers Diana