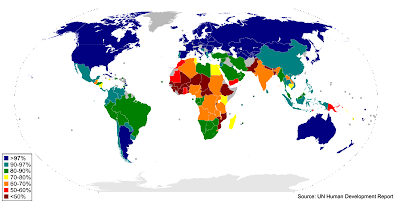 While researching for a story on education in Cambodia I came across this:


According to CIA World Factbook, "over two-thirds of the world's 785 million illiterate adults are found in only eight countries (Bangladesh, China, Egypt, Ethiopia, India, Indonesia, Nigeria, and Pakistan). Of all the illiterate adults in the world, two-thirds are women. Extremely low literacy rates are concentrated in three regions, the Arab states, South and West Asia, and Sub-Saharan Africa, where around one-third of the men and half of all women are illiterate."


A number of the Bloom women are illiterate, which is unsurprising, since we employ middle-aged women who were young children during the Khmer Rouge era. But the country has made improvements.

This is unsurprising, because when money is short, it is the boys who parents choose to send to school. Many young Khmer women are forced to stop their education and instead help out in the house or get a job.
Posted by Diana Saw at 6:49 pm