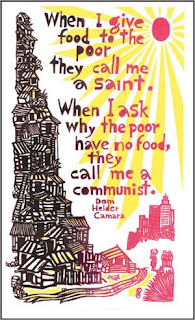 Hélder Câmara was a Brazilian Roman Catholic Archbishop. In 1973, he was nominated for the Nobel Peace Prize by the American Friends Service Committee (AFSC). He also wrote a short tract in 1971 called "Spiral of Violence" in which he links structural injustice (Level 1 violence) with escalating rebellion (Level 2 violence) and repressive reaction (Level 3 violence).

Here is an excerpt:


The authorities and the privileged are alarmed by the presence of agents coming from outside whom they call 'subversive elements', 'agitators', 'communists'.

Sometimes they are indeed people committed to an ideology of the extreme left who are fighting for the liberation of the oppressed and have opted for armed violence. At other times they are people moved by religious feeling, who can no longer tolerate religion interpreted and lived as an opium for the masses, as an alien and alienating force, but want to see it at the service of the human development of those who are imprisoned in a sub - human condition.

The authorities and the privileged lump the two groups together. For them, those who, in the name of their religion (whether they are clergy or laity), are working for fundamental reforms, for a change in structures, have abandoned religion for politics, are foundering in leftism or, at the very least, are innocents preparing the way for communism.

There are two main counter - arguments to this attitude. The authorities and the privileged pretend to believe that without the presence of 'agitators', the oppressed masses would remain with their eyes closed, passive and immobile.

Today, with all the means of transport and social communication available (including the transistor radio), it is ridiculous to think that one can prevent the circulation of ideas or the spread of information.

And secondly, monolithic and obsessional anti - communism is responsible for many absurdities. The prime one is maintaining injustices because tackling them 'might open the door to communism'.


Yes, the authorities and the privileged (the powerful and the rich) are predictable. Câmara was proved right once again 16 years later, in Singapore. In 1987, a group of Singaporean Roman Catholic activists were labelled "Commnunists" (or more precisely "Marxists"), and imprisoned by the government in The Marxist Conspiracy.

Replace "communism" with "socialism" and you have the USA today.


"Aid is necessary, but not enough. Until someone has the courage and intelligence to undertake a complete revision of international trade policy, the poor countries will continue to get poorer and to enrich the wealthy countries more and more."


Not only will poor countries enrich wealthy countries, but the poor within those countries will enrich their elite.

Thanks Marx051 for adding the image to reddit so I got to know about Hélder Câmara. You can read "Spiral of Violence" here . The book is out of print but Alistair McIntosh scanned it so we can still read it. I love the Internet community.
Posted by Diana Saw at 6:38 pm