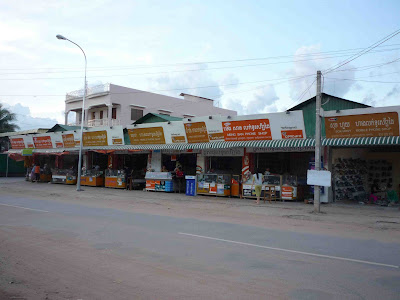 This is a row of 8 (count 'em) phone shops, all selling the same things on a street to my house in Siem Reap. The one at the end gave up and is now a second-hand shoe shop. There is a similar row of shops in Phnom Penh in between Wat Mohamotrey and the Olympic market. They are all pharmacies selling mostly the same drugs. Incredible.

I remember a street in Hong Kong which sells all toilet bowls and other toilet fittings.

No doubt it is the copycat mentality. B sees A doing well selling phones so decides to do the same and then C too, takes advantage of the fact that people are already visiting that place for phones, so sets up his own phone shop. And on it goes.

One also thinks of price fixing, i.e., the shops, whether explicitly or implicitly, sell items at the same prices. It would be hard for one shop to stray far from the prices of the rest because he'll lose business to the competitors next door.

Is this an Asian thing? Do shops in the West operate in the same way? A row of shops all selling the same thing? I don't recall but maybe I am wrong.
Posted by Diana Saw at 3:39 pm