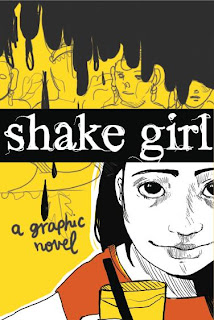 I wrote last week about acid attacks in Asia after reading about the Taliban's attacks on schoolgirls. I had no idea that there has been a comic book and a movie about Tat Marina, the young Cambodian 16 year old, who was attacked by the vengeful wife of her lover.

The movie called "Finding Face" was released at the International Film Festival and Forum on Human Rights in Geneva in March. Tat Marina is now living in the US where she was given asylum. She now has a four year old. Her family was shown footage of the film and her mother says beauty is a curse.

The comic (cover depicted here) is called Shake Girl because Marina was once a fruit shake seller in Phnom Penh. It is published by Stanford University.
Posted by Diana Saw at 11:59 am

Wow, I remember hearing about her but had no idea that there was a film about her.

I'm really interested in your blog. I keep coming back to check in on Cambodia. I'm currently looking for a few documentary projects to produce...so I'm keeping my eyes and ears open.