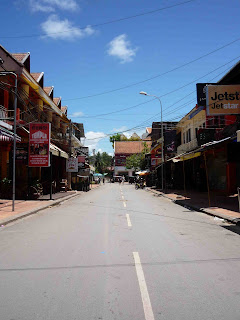 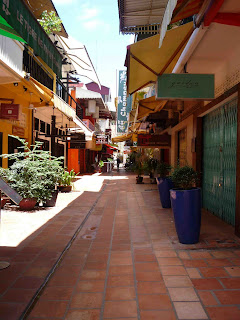 I took these photos close to 1pm yesterday, the most important day of Pchum Ben. I was amazed. This is the only time I have ever seen Pub Street so quiet. There was absolutely no one around and most shops were closed in Pub Street and the Alley south of it. This was at 1pm. By 8pm of course the street was bustling once again.

Pchum Ben is one of the three most important festivals in Cambodia, the others being Khmer New Year in April and the Water Festival in November.

Pchum Ben ("Ancestors' Day") is when Cambodians pay their respects to deceased relatives. Khmers, if they can, will leave their jobs at the cities to return to their hometown to pray for their relatives at their local pagoda. The Bloom sewers were off from Thursday so they can return to their hometowns, in Svey Rieng, Prey Veng, Kampong Cham, Kampong Thom, Kandal etc. Chhun Hy has also returned to be with his family in Kampong Cham, which is why I am here working in the shop, in the hopes of selling some bags even though the place is so quiet. Everyone will be back at work only on Tuesday.

Phnom Penh must be the same. I loved the peace and quiet during Pchum Ben when the streets are empty of cars and motocycles. I lived round the corner from Tuol Sleng Museum or S21 in Phnom Penh, and I remember in 2007 there was a big "bon" (celebration/festivities) at Toul Sleng as Cambodians paid their respects to those who died in that former schoolhouse. The people who came to pay their respects included some "m'nu thom" (important people) and the access to the museum was blocked by huge Lexus's (Lexi? haha).

Pchum Ben 2006 was spent with my friend Sophon and we visited a pagoda with him where he gave food to the monks. Later we went to his house for a meal, which I remember to be delicious. Yesterday Pheon, my tuktuk driver here in Siem Reap, came to the shop to pass me four big rolls of glutinous rice cake stuffed with yellow beans made into a paste (I think they are mung beans). I love that Khmer cake. More expensive versions have some fatty pork in the centre, which is also delicious.
Posted by Diana Saw at 1:42 pm