It pays to be a lawmaker in the US 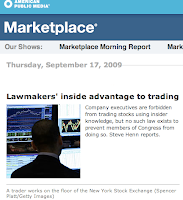 Members of Congress are not prohibited from insider trading and their returns beat the average investor by 12% annually. Source: marketplace.


Alan Ziobrowski is a business professor at Georgia State University. Using hundreds of personal financial disclosures from the 1990s, Ziobrowski analyzed more than 6000 stock transactions by members of Congress going back up to 15 years.

ZIOBROWSKI: The real danger here, of course, is that you are going to have in some cases congressman that will literally vote or act against the interests of their constituents in favor of their portfolio. And right now there is virtually nothing that would stop them from doing that.


Thanks to sunkid via reddit. Here is a relevant article:

The Rich Still Run the USA :


"Corruption takes many forms in different countries and locations. Here in the United States it may not be as common to pay off a judge or a customs official as it is in most low- and middle-income countries, but we do have quite a bit of legalised bribery, especially in the form of electoral campaign contributions. The most obvious current case is that of healthcare reform, where the powerful insurance, pharmaceutical and other lobbies are in the process of vetoing some of the most important parts of the healthcare reform that most Americans want and need."

"Some are doing remarkably well – Goldman Sachs, a recipient of billions of dollars of taxpayer assistance, is expected to pay bonuses averaging $700,000 each to 30,000 employees. The vastly over-bloated financial industry that brought us this calamity has shrunk by only 7.7% in terms of employment, far fewer than the percentage of jobs lost in manufacturing (14.6%) or construction (31.6%), since the recession began.