Dr Norman Borlaug who taught the world to feed itself dies 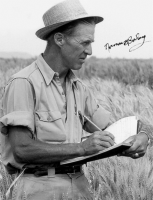 From the New York Times:

“More than any other single person of this age, he has helped provide bread for a hungry world,” the Nobel committee said in presenting Dr Borlaug with the Peace Prize. “We have made this choice in the hope that providing bread will also give the world peace."

Dr Borlaug was 95. He is an inspiration, walking away from a promising job at DuPont to help farmers in Mexico improve their crops. His advances led to spectacular success in increasing food production in Latin America and Asia.

Among his discoveries was a gene found in a wheat strain. The gene could shrink the wheat plant creating a stubby variety whose head did not shrink. This means a small plant could produce a large amount of wheat. "On the same amount of land, wheat output could be tripled or quadrupled. Later, the idea was applied to rice, the staple crop for nearly half the world’s population, with yields jumping several-fold compared with some traditional varieties."

It wasn't all smooth sailing, as people took time to accept his ideas.


At the invitation of the Indian and Pakistani governments, Dr. Borlaug offered his advice. He met resistance at first from senior agricultural experts steeped in tradition, but as the food situation worsened, the objections faded. Soon, India and Pakistan were ordering shiploads of Dr. Borlaug’s wheat seeds from Mexico...Harvests soared: the Indian wheat crop of 1968 was so bountiful that the government had to turn schools into temporary granaries.


Dr Borlaug was not without critics:


"In a characteristic complaint, Vandana Shiva, an Indian critic, wrote in 1991 that “in perceiving nature’s limits as constraints on productivity that had to be removed, American experts spread ecologically destructive and unsustainable practices worldwide.”

Dr. Borlaug declared that such arguments often came from “elitists” who were rich enough not to worry about where their next meal was coming from. But over time, he acknowledged the validity of some environmental concerns, and embraced more judicious use of fertilizers and pesticides. He was frustrated throughout his life that governments did not do more to tackle what he called “the population monster” by lowering birth rates."