Labour Start: where trade unionists start their day on the Net 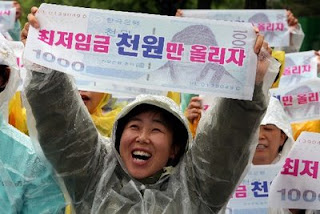 Photo from The Hankyoreh showing a Korean woman holding a copy of a 1,000 Won note to campaign for an 1,000 Won (80 cents US) increase in the minimum wage in Seoul.

I am one of 60,000 email subscribers of LabourStart.org because I support trade unions, also known as labour unions, in principle. (There are practical issues with unions of course and I will go into that later).

LabourStart.org is a great resource for people interested in workers' rights. Below are some of the articles for Cambodia 2009:

A trade union is simply an organization of workers who group together to achieve common goals, usually better pay and working conditions. The union representatives negotiate terms with company owners which are binding on members. You can see how trade unions have an important role to play especially in countries with weak labour laws to protect citizens. If you think about it, if the law is not on their side, strength in numbers and collective action is often the only way many workers can demand fair treatment from their factory owners, if these owners are exploitative, as many are.

But this is also why corporations have always sought to limit the existence of labour unions (and tolerate them if they can't get rid of them). This is also why many governments have sought to eradicate labour unions, in the pursuit of making their country's labour cheaper and thus more competitive.

History is full of examples of brave men and women who try to demand justice, in the form of fairer pay and working conditions, for their fellow workers. Cambodian trade union leader Chea Vichea who was murdered in 2004 in broad daylight is the most famous of these brave Cambodians.

I remember watching a documentary a long time ago on the incredibly brave and tenacious South Korean women labour activists who were beaten, had feaces thrown at them etc.


"In August 1979, 200 young women employees of the Y.H. Textile and Wig factory staged a peaceful vigil and fast to protest the company's closure of their plant. On the fifth day of the vigil, more than 1,000 riot police, armed with clubs and steel shields, broke into the building and forcibly dragged the women out. One 21-year-old worker was killed during the incident. It was her death that touched off widespread rioting throughout South Korea and crystallized the opposition that eventually forced President Park Chung Hee out."


Source: "Women in the Fray"

The struggles of the women activist have been documented as facilitating (1) the rise of the opposition consciousness, (2) the growth of radical ideology, (3) the mobilization and consolidation of opposition groups, and (4) the expansion of the concept of human rights and democracy.

These mainly blue-collared women protestors transformed how labour issues are viewed in South Korea: now as political problems to be taken seriously by the government. Some of these women also became labour full-time activists. They laid the foundation for the waves of protests in June 1987 in South Korea, when white-collared workers such as journalists and teachers demanded democracy. The nationwide protests put an end to the tyrannical rule of Chun Du-hwan's regime and opened a new chapter in South Korea's contemporary history.

So you can see, if true to its cause or raison d'être (reason for being), trade unions can be a very powerful tool for democracy.

But trade unions can also be subverted for personal gain. I had the opportunity to speak with a senior member of the International Labour Organisation (ILO) in Phnom Penh who explained to me that things are not always what they seem. In garment factories in Cambodia, for example, there are fake labour unions that are really mafia gangs who try to extort money from company owners.

Some men (it's always the men; i think because women don't have the courage. I think this is one of the reasons why many factories choose not to employ men, seeing them as potential trouble-makers) see a trade union achieve small wins in the factory and decide to form their own gang. Of course this undermines the real trade union and now, there is internal fighting as well as the fight with the company owners. At stake is money.

There is much to say about trade unions, and I'll have to pick up on the topic another day.

I had only wanted to tell readers about Labour Start and the contest for the Labour Photo of the Year but as usual I get distracted. So far, 97 photos have been submitted. (You can see them on Flickr) and the deadline is 1 Oct. You can send any questions about this competition to Derek Blackadder - canada@labourstart.org
Posted by Diana Saw at 11:53 am