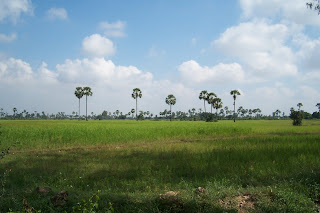 It has not rained for a week in Siem Reap. This should be the rainy season, which lasts until Sept/Oct. But it is hot like April (the hottest month in Cambodia), and we are all wilting. I just checked the site wunderground.com for the temperature and it says 34 degree celcius.

No doubt it's global warming.

Chhun Hy tells me in his province, Kampong Cham, there has not been regular and sufficient rains for the past 3 months, which means the rice shoots do not have a chance to survive. "The small rice plants all die," he says. The last time Chhun Hy's parents saw a drought (in relative terms) like this was 15 or 20 years ago. At 24, Chhun Hy cannot remember those times. He tells me the provinces of Kampong Cham and Battambang are the biggest producers of rice in this country.

An Australian tourist told me she saw lots of brown land from her view on the airplane when I told her it is not normally so hot at this time of the year.

Chhun Hy's parents who are farmers in Kampong Cham have told him many people from that province have left to look for work in Phnom Penh. But there is little work available in the capital city because of the economic downturn. I asked if they will try to come to Siem Reap and he says because they don't have education and cannot speak English, the country folk will find it hard to get jobs. They can only do odd jobs, and many end up as construction workers earning a couple of dollars a day, if they are lucky.

According to Cambodia's Ministry of Agriculture, Forestry and Fisheries figures, 85 percent of Cambodia's population relies on agriculture for a living. The country produces 6 million tons of unhusked rice annually and there are 2.3 million hectares of rice paddy land. (Source: Xinhua).

They will be alright this year as Chhun Hy's family has rice left over from last year's harvest. The problem will come next year, if this year's crops fail. If there is not enough rice, villagers will borrow rice from wealthier neighbours or merchants who normally charge 50% interest, so if you borrow one sack of rice this year, come next harvest, you will have to repay 1.5 sacks. Chhun Hy says in his province rice is harvested only once a year - rice planting season starts in May and the rice is harvested in November, during the dry season.

But I read that Cambodia has actually two rice crops each year: a monsoon-season crop (long-cycle) and a dry-season crop.

"The major monsoon crop is planted in late May through July, when the first rains of the monsoon season begin to inundate and soften the land. Rice shoots [the small rice plants Chhun Hy refers to] are transplanted from late June through September. The main harvest is usually gathered six months later, in December. The dry-season crop is smaller, and it takes less time to grow (three months from planting to harvest). It is planted in November in areas that have trapped or retained part of the monsoon rains, and it is harvested in January or February....

"In addition to these two regular crops, peasants plant floating rice in April and in May in the areas around the Tonle Sap (Great Lake), which floods and expands its banks in September or early October. Before the flooding occurs, the seed is spread on the ground without any preparation of the soil, and the floating rice is harvested nine months later, when the stems have grown to three or four meters in response to the peak of the flood (the floating rice has the property of adjusting its rate of growth to the rise of the flood waters so that its grain heads remain above water). It has a low yield, probably less than half that of most other rice types, but it can be grown inexpensively on land for which there is no other use.

Today it was reported Japanese scientists have developed high-yield deep water rice, providing hope for better rice production in lowland areas that are affected by flooding: "[Project head Motoyuki] Ashikari said his team already successfully tested the gene on a Japanese "Japonica" rice, and his team now plans to create a flood-resistant long grain rice in three to four years for use in countries such as Vietnam, Thailand, Myanmar, Bangladesh and Cambodia."

However, advanced technologies do not necessarily mean farmers will be better off. Here is what happened in Thailand:

"New technologies also pushed up the entrance cost of rice farming and made it harder for peasants to own their land and produce rice. Farmers that already had somewhat large scale operations or could afford all the new chemicals, rice strains, and tractors benefited greatly while the normal peasant was turned from a land owning rice producer to a manual laborer on others land."

In addition, the Thai government's annual taxes, even in a bad year, meant that many peasants were unable to keep their land, so ended up being tenants, paying rent on the land. So while advances in technology have helped improve overall production of rice in Thailand, many Thai peasants were left worse off.

In this 2007 news article, Pu Kea, chairman of the Rice Hulling Mills' Association in Cambodia's Battambang province, told Xinhua News that huge profits went to the exporters from Malaysia, Singapore and African (this surprised me) countries, while the farmers and the mill owners could only make limited incomes from simple processing procedures.

In 2006, Prime Minister Hun Sen called on Laos, Myanmar, Thailand and Vietnam (those along the Mekong River, which together produce more than 10 million tonnes, almost half the world's annual rice exports) to join hands with Cambodia to form a rice producing cartel, much like the Middle East's OPEC, the Organization of the Petroleum Exporting Countries.

The association could have say in rice price adjustment and play a role in balancing OPEC's influence, Hun Sen said then - "If they want cheaper rice, then they should decrease oil prices."

When i read your article, i'm very afraid for this population. The textile industry is already down.. and now the farmer can have problem for feed the country.