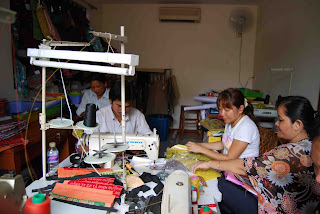 I just found these pictures of us Bloomers (I always laugh because I think of large underpants when I say this). We are sewing some sequins on our recycled fishfeed bags. It was early days, and the workshop was in our house on St 330 in Phnom Penh, where the guesthouse and restaurant Changiville is now. From left, Neang, Sareoun, me and Sipha. 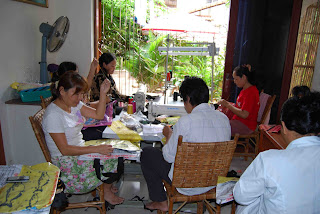 The room looks out into the garden and it was nice to look at the greenery while working. There were also sewing machines in the porch because it was airy. We stayed in that beautiful villa until Nov 2007 when Alan and I decided to move to Siem Reap for a quieter life. I have to say looking back we were crazy to have rented such a big place. It is the typical mistake foreigners make. When you first arrive in Cambodia, you think everything is cheap because you are comparing things with back home. We rented this 3 and a half storey villa for less than we did for a small condominium in Singapore so we thought it was a bargain. Then you live in the country for a while and you realise what real prices are for Cambodia. 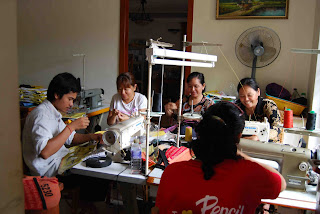 Included in the third photo are Edany and Sophea (the one in the red shirt). Of the lot, Sipha was the former manager who was asked to leave. Sareoun left soon after. He told me he was going to rear pigs, but it turned out he was doing what Sipha did, i.e., sew the recycled bags on a piece-rate basis for other shops in Phnom Penh. The difference is Sareoun had the decency to not take a salary from Bloom while making our designs on the side. Early this year, the shop in BKK1 stopped ordering from him and Sareoun called to ask if he could re-join Bloom. Unfortunately by that time, I already had replacements whom I was happy with and could not take him in. I like Sareoun a lot because he's responsible and basically a decent chap. 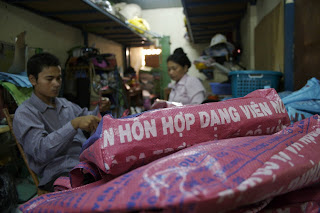 This is Sareoun working on quality control in the second Bloom workshop near Wat Mohamotrey, near Olympic Market. We moved into this new workshop after Alan and I left for Siem Reap. I did not want to force the women to move with us, as they have children who go to school here in Phnom Penh. So I rented a new workshop and we were there from Nov 2007 until Aug 2008. That's Neang behind Saroeun. This photo and others were taken by a New York based photographer Corey Torpie. Corey followed the Bloom team for a day, even visiting the women at their homes. I'll upload her gorgeous pics next. Already you can see the difference between this photo of hers and the rest taken by me! 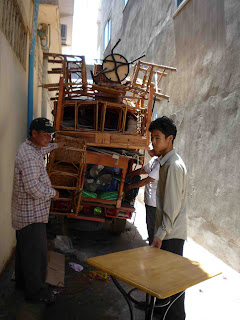 And this is Sina, Sareoun's replacement. I am very lucky to have met this young man, first as a waiter whom I hired for the now defunct Bloom Cafe (it's now the afore-mentioned Changiville). He's a super young man and here he is oversee-ing the move to the next, and third workshop. He is trying to figure out how to pile the small table onto the tuktuk. We had to move workshops because of the bad blood involving Sipha. I ended up losing the deposit because I did not fulfill the contract but it was more important that the women feel safe working in a new place where they would not be harassed by Sipha (yes, there was plenty of drama). We quickly found the third thanks to my super tuktuk driver and friend, Sophal. 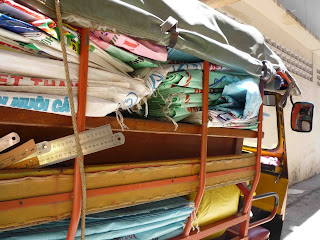 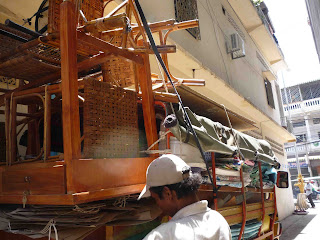 You can see the rice and fish feed bags all piled onto the tuktuk. There are 2 types of tuktuks and this kind has long padded benches on both sides of the carriage. They're different from the tuktuks that carry tourists, which have cushioned seats positioned like those in a horse carriage. This is the way we move things in Cambodia. There is another vehicle similar to this tuktuk but without a roof, and that allows you to transport tall items. It's called a l'morque. When Alan and I moved to Siem Reap from Phnom Penh in November 2007, we rented a lorry and driver for USD170. The trip took about 7 hours. Chhun Hy moved with us, as did our two dogs Austin and Nessie. Sina joined us on that trip because he had never been to Siem Reap and we could do with an extra pair of hands. We arrived at our new Siem Reap home at night and the next day I gave Sina and Chhun Hy some money to visit the temples and have a day of fun. They loved Angkor Wat. They had their photo taken by one of those freelance, roaming photographers but, to their dismay, the guy never turned up when it was time to collect the pics. 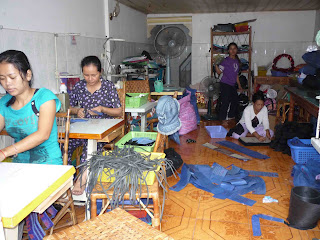 And this is our third and current workshop in Phnom Penh, and we've been there for a year now...yes, Bloom is 3! The workshop is in a little lane off Norodom Boulevard near the Ministry of Fisheries. I took this just as Kamhut turned around to say something to me, haha. Here we are making the 1000 bags for Amnesty International. That's Chanthy on the left with Sophea at the machine behind her. Neang is on the floor drawing. Not pictured: Sina, Edany and Theary. This workshop is also in a good location and the women were happy because it is closer to Chhbar Ampou across the river, where most of them live. A couple of the women are staying at the workshop as there is a room upstairs. I allowed them to do so because otherwise they'd have to cycle for an hour each way to go to their homes at Pochentong, where the airport is. I have been lucky finding houses and workshops in Cambodia, in that landlords are always kind and prices always reasonable.
Posted by Diana Saw at 2:35 pm