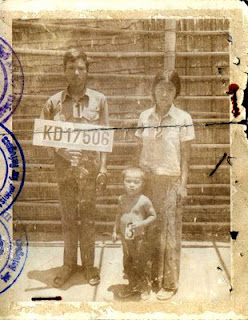 I just discovered this blog, wherethefisron.blogspot.com. Ron is a Cambodian who grew up in Canada and now travels the world taking beautiful photos. Ron left me a comment a few days ago and is a follower of this blog. Initially, I thought he's a Westerner, because of his name, but today I explored his blog and discovered this:

"In July of 1979, my parents escaped the slave camp they were in. Walking for 3 days without food or water thru dense jungles littered with landmines, they finally made it to the safety of a UN refugee camp along the Thai-Cambodian border. In December of 1980, I was born."

It's from an entry called "Between Heaven and Earth: kd17506", which is the name of the family photograph shown above, taken at the refugee camp, where the multitude of human beings were identified by assigned numbers.

Ron writes beautifully and this other entry "Between Heaven and Earth: Reincarnation" really moved me.

"By all accounts, I had a normal upbringing. And today, if you were to look me straight in the eye, you'd never believe my story. You'd say I'm lying. You'd say I'm full of shit. But believe me when I say this: "war is no lie."

It's not easy telling your friends that you're a child of war. While growing up in Canada, I never did. I hid it deep within me. I was ashamed. I was ashamed to be called a refugee, an immigrant, a minority. I was ashamed to say I am Cambodian. My face would turn red and I'd stare at my feet while the other kids laughed and giggled in amusement. Cambodian. Where's that?

My parents worked twelve hour days, seven days a week. When I got home from school, I'd cook for myself, vacuum the house and made sure the meat was defrosting so mom could make supper when she arrived. On weekends, I'd go to church when my neighbors invited me. When it was a Buddhist holiday, my parents would take me to a temple. They never discriminated. I was taught to love, to cherish each other and to forgive. They never cared if that message came from Jesus, Buddha, or Allah. A far cry from the world they had left behind.

It's interesting when you think about it. They've gone through so much pain and suffering, yet, they still find it in their hearts to forgive. To forgive the soldiers who killed their families, robbed them of their childhood and raped them of their freedom. To forgive, but never forget.

In light of the fighting in Gaza, I wish all children could have parents like Ron's. If you are interested in Cambodia, or just in humanity and the power of the human spirit, I encourage you to visit Ron's blog. I know I'll be following his journey.
Posted by Diana Saw at 1:02 pm

Diana,
You're too kind. I'm glad you enjoy my blog. I'm also loving yours! Please keep writing and keeping us informed. I also had a chance to check out your Cambodia Bloom website and I was floored with inspiration. Thank you!