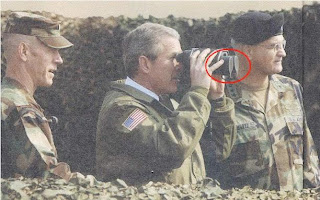 Photo and quotes from slices-of-life.com.

I laughed aloud at some of these quotes from the soon-to-be former President of the USA. It's incredible. If you get the chance, watch Idiocracy, a movie starring Luke Wilson, the "most average" US Army soldier in 2005 who becomes the smartest man in 2505 after he wakes up from his hibernation chamber. The movie is a cautionary tale of what the USA could be like if current trends of anti-intellectualism, commercialism and cultural dumbing down continue. I think George W Bush is himself a cautionary tale. More gems on the slices-of-life website.

“Our enemies are innovative and resourceful, and so are we. They never stop thinking about new ways to harm our country and our people, and neither do we.” —Washington, D.C., Aug. 5, 2004

“My plan reduces the national debt, and fast. So fast, in fact, that economists worry that we’re going to run out of debt to retire.” —radio address, Feb. 24, 2001

“I’m the master of low expectations. I’m also not very analytical. You know I don’t spend a lot of time thinking about myself, about why I do things.” —aboard Air Force One, June 4, 2003

“We both use Colgate toothpaste.” —after a reporter asked what he had in common with British Prime Minister Tony Blair, Camp David, Md., Feb. 23, 2001

you forgot my favourite: "I like the French but they don't have a word for entrepeneur."