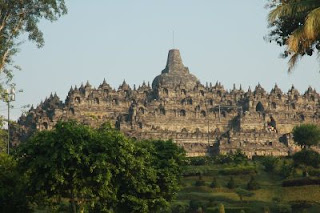 Photo of Borobudur as seen from the east from wikitravel.

My blog posts here and here on Phoen, my tuk tuk driver in Siem Reap, were read by tourists planning to visit the town. Touched my Phoen's difficult life and wanting to help him somehow, two people emailed me. One is Danti from Indonesia, and the other is someone from France whom I've lost contact with. I hope the French person who emailed me will employ Phoen.

I am surprised that many Western tourists I meet here in Siem Reap do not know Borobudur. One said to me Angkor Wat is the only large religious monument in Southeast Asia. He had never heard of Borodudur.

According to wikitravel: "The first archaeological study of the site was initiated in 1814 by Sir Stamford Raffles, founder of Singapore. First restored in 1907, the monument suffered from neglect and war and was once more in effect rebuilt in the 1970s under the guidance of UNESCO, who designated Borobudur as a World Heritage Site. The massive restoration process involved the removal and refurbishing of over one million blocks, rebuilding the foundation and adding drainage systems."

Adanti tells me it is very cheap to live in Yogyakarta, where fried noodles (mee cha is what it is called in Cambodia) costs just USD0.20, compared with USD0.50 (local price) here in Siem Reap. Adanti has a Masters in development and has worked for Handicapped International, AUSAID etc. It was very interesting talking to her about my challenges working in Cambodia. The issues are the same in Indonesia, issues of motivation and encouragement. She tells me success rates in her town is between 1 and 3 in 10, i.e., for a good project, only 3 in 10 of what she calls "beneficiaries" get out of the cycle of poverty they are in.

Adanti brought me many presents from Indonesia, all handmade. The Indonesians are amazing, turning water hyacinth, bamboo, banana bark and coconut husks into handicrafts - things I have not seen in Cambodia. She was surprised to see in Cambodia coconut husks being thrown away after locals drink the water. She says in Indonesia people would be saving them to make bags and jewelry. I hope our Cambodian team will be inspired by the objects when I show to them - they're really a clever way of recycling, of turning trash into cash. Adanti said "My people are poor so we have to think how we can make money." Respect.

She's now back home and just sent me this email:

Sorry, I late reply your email. Thank you very much for your kindness :) I'm really happy when I visited Siem Reap. Siem Reap is the best!

I want to know better Phern family. I'm touched with his kindness. So, I gave him my rain coat, torch light and t-shirt. It's important to him wear good rain coat, since I've seen his rain coat not appropriate to cover his body.

I will meet coconut shell producer to find out how to make it. I think I have the process producing pictures. I'll send it to you :)

Diana, I was in Borobudur a few months ago while in Indonesia and I must say, it is amazing! Not as big as Angkor, but the architecture is very similar. The bells around the temple are just breathtaking. Most tourists that visit often try to put their hand/arm in the bell to touch the Buddha inside. It's said that if you can touch him, you're considered lucky. It's definately a place you must see!

And you're right about the Indonesians, they can make something out of anything! I actually bought a few of those coconut husks for my parents.

I hope you're well.
Ron

Hi Ron, hope you're well! You're always on the go, I envy your life - you get to see the world!

Yes, Borobudur is a must see. It would be nice if I could visit Ardanti in her home town.

Hello,
We are Master students of National Taiwan University of Science and Technology.
We are doing a research about Heritage in Yogyakarta, center of Java. We choose Borobudur and Prambanan to survey how heritage impacted or merged in tourism sites in Indonesia.
And we really need your opinions about those two heritages so we could try our best to improve the tourism in heritage sites.
Thank you for your help!!  Thank you very much!!!
My e-mail: yaya24682006@yahoo.com.tw

All of Students of Graduate Institute of Architecture and Historic Preservation.