Ok, I headlined this "Annoyed with Facebook - Part 1" because I am sure there will be other things that annoy me about the social networking site.

But this is the big one. I am pissed off with Facebook for not helping users like me convert our Groups into Pages.

Some of you may know Pages is a later application compared with Groups. Back then, FB Groups were more common than Pages and the Bloom Bags Facebook Group was created by a friend of mine in Singapore (actually an ex-colleague who, even though nags me now and again about getting a job, totally supports my crazy social enterprise dream).

I wasn't too bothered because I thought a Group was just as good as a Fan Page and I had read there were some problems with Pages. People were protesting they were made into Fans when all they had done was join a Group. Then I did some research and found there are some advantages to having a Page (see screenshot below facebook-group-vs-facebook-fan-page-whats-better). 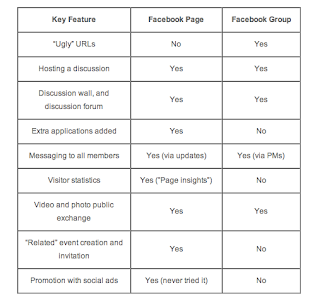 Then--and this was what sealed it for me--Facebook changed its interface to make Pages more visible than Groups on users' Information page. Having a Page would help Bloom Bags be more visible because a Group tends to get buried in amongst the others (to see the difference, check out the screenshot below, taken from my "Information" tab). 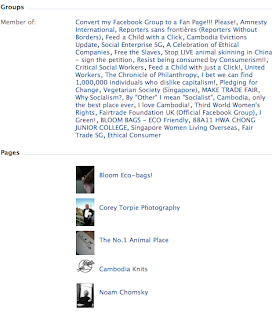 So ok, I thought. Let's migrate the Bloom Bags Group, which now has almost 530 members, to a Page. And, I thought, if any Bloom Groupie decides not to be Fan, he/she can remove themselves from the Page - surely that is possible.

I found out it is impossible to migrate a Group to a Page. The only way is to invite people all over again. Start from scratch and ask your pals - one by one - to be fans. You can view the forum on facebook.com itself and see the frustration of other users like me.

In May I posted this on the forum: "Trying to convert my group to a page too. Seems that latecomers to FB who started out with pages have better luck than us old-timers.... Is this any way to reward early adopters?!"

I was seriously pissed off that late-comers to FB were able to set up their Page with ease while early users like us had to face this obstacle. It reminds me of all those companies that give freebies to new subscribers but who say "Promotion only for new subscribers; not available to existing subscribers." Translation: we don't care about you loyal, long-time subscribers - we've already got you!

Another poster on the same forum wrote:"Hit the 5000 mark for the Facebook group and the major features (esp. personalized msg-ing, invites to all members) were disabled. Now the group has grown to 18,000+ members and I've no idea how to encourage the members to transfer to the fan page. It's an impossible job."

At that point (in May), I gave up because I did not want to start building the Bloom support group from scratch - and annoy and confuse Groupies by inviting them to join yet another Bloom Facebook application. But as I said, the new FB interface has convinced me I need a Bloom Page, so here I am again. In fact, I started the Bloom Eco-Bags Page just 20 mins ago and Bloom already has 17 fans! (Thank you, my wonderful friends!)

Apparently, the Facebook team used to help do this conversion for Groups. College web editor was able to do this, but FB has since stopped this service.

So obviously the FB team can do the conversion; they just choose not to. I wish they would explain why instead of ignoring forumners in this way. Was it because of the complaints I alluded to earlier (Groupies being forced to be Fans)? Or is it FB's strategy to have as many groups on its site as possible?

Cos just last month, someone started yet another Facebook group - Convert my Facebook Group to a Fan Page Please!!
Posted by Diana Saw at 5:46 pm