in less than half a year. 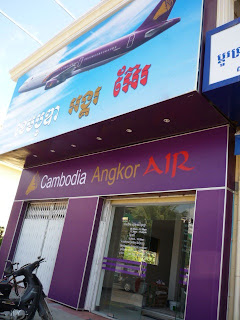 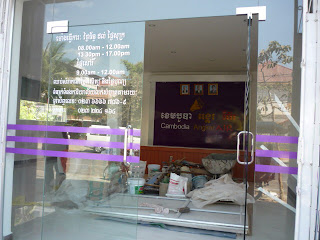 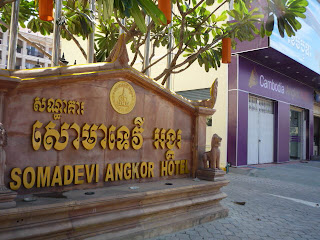 I was trying to see if the Cambodian carrier has a monopoly on that route and it's pretty confusing. If you Google "direct flight Siem Reap to Ho Chi Minh", you'll only get flights by Vietnam Airlines. But going on CambodianAngkorAir.com, you will find that online bookings are made via Vietnam Airlines and the flights, including those by Cambodia Angkor Air all start with VN (eg VN826 or VN9881). Could VN826 be a VN Airline plane and VN9881 a Cambodia Angkor Air one? Or are they both Cambodia Angkor Air? Most confusing. Why should it matter, you ask? Well, I guess only if the two airlines buy different kinds of planes?

I will talk to a travel agent tomorrow to find out more. Sometimes, Google can only do so much.

Anyway, here is the AFP story:


PHNOM PENH: Cambodian Prime Minister Hun Sen on Thursday said the country's new national airline, Cambodia Angkor Air, had begun to turn a profit, raising hopes it would not fail like its predecessor.

The airline, which has capitalisation of US$100 million, was launched in July following the failure of a previous effort in 2001.

Cambodia Angkor Air, a joint venture between the government and Vietnam Airlines, aims to promote Cambodia as a destination and boost tourism.

"We expected the airline to make losses for two years, but now this airline is making profit because a lot of passengers are using it," Hun Sen said during a provincial ceremony.

The last national carrier, Royal Air Cambodge, folded in 2001 after running up losses of US$30 million.

Tourism is one of the only sources of foreign exchange for impoverished Cambodia, which is recovering from nearly three decades of conflict that ended in 1998.

The kingdom aims to lure three million tourists annually by next year, and in 2009 attracted more than two million holidaymakers.

Hey there Richard, thanks for the comment. I tried to find it on google mapmaker (the link didn't work for me, I'm afraid) but could not see it.

I made a mistake: the office is in front of the Somadevi Angkor, not the Prince. It's not as far north on Sivatha, and is occupying what used to be a fridge shop, next to Curry Walla. I don't know if this helps?

I see you contributed to the Siem Reap mapmaker, which is great. Thanks for sharing! This is the first time I've used googlemaps actually, and when I get the hang of it I'll contribute too.