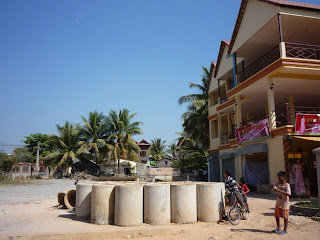 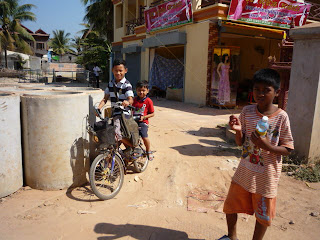 I took this on my way to the shop this morning. Kite flying is interesting - it's enjoyed all over Asia, from Southeast Asia, to China, to Afghanistan (have you read "The Kite Runner"? You must!). The origins are unclear - some say China, when it was flown 2800 years ago; others say leaf kites were found in Indonesia way before then, based on the interpretation of cave paintings. Whatever - I am just amazed the same toy has spread so far. 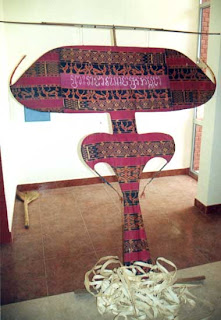 Pictured is a traditional Cambodian kite, made in 1949 with beautiful silk. Photo from subvision.net (many other beautiful kites on the link). It's called a "Kleng Ek" which means "a kite with both unique sound and musical instrument". An international kite flying festival will be held in Cambodia's Koh Kong province on 6th and 7th of January 2010, it was just announced. (So fortuitous I was googling Cambodian kites!)

Later that month, January 30 and 31, Cambodian kite masters will be in Singapore, joining those from Austria, China, France, Indonesia, Italy, Malaysia, Philippines, Singapore and Thailand for the 3rd Singapore International Kite Day. You can find out more on the Singapore Kite Association website.

I joined the group for a kite flying outing one Sunday. There are only a few places to fly kites in Singapore, where land is scarce. We went to Pasir Ris Park, which was beautifully landscaped. It's not easy to fly a kite well - high in the sky. You have to run fast and let go of the string at the same time to let the wind lift the kite. I remember also from that outing, the champion kite flyer, a Singaporean lorry-driver who represents the country in competitions in Asia and who, as a hobby, makes kites out of recycled plastic bags.

He told me how to look for a good kite: the bone has to be symmetrical and while in the old days, kites were made with bent bamboo sticks, modern kites use fibreglass. Anything that is light is good. It's been a while so I can't remember everything he taught me. But I remember he said kite masters from Hong Kong were among the best, while Japanese kites are beautiful - they put a lot of effort in their kites. At kite competitions, you can see lots of beautiful custom-made kites.

After the outing I told my dad excitedly about what the kite master-maker said about using kites with strings coated in glass so as to cut down your competitors kites, something I had read in "The Kite Runner". I was amazed when my father told me he did the same as a small boy. The string was fishing string and then there was some special glue they used and they would dip the glue-coated string in fine bits of broken glass.

My father and other boys in the "kampong" (Malay for "village", different to Khmer for "port", as in "Kampong Som" or "Kampong Cham") would run after kites that had been cut down, because finders keepers and they could sell the kites back to their owners. They did not care about the small cuts they suffered to grab the kite. I'm sure it was more than the money that motivated them; it was also a chance to be champion!

The way my father described it, in what was then British Malaya (in the late 1940s) was exactly as it was in the book, which began its story in 1970s Afghanistan. I was just struck by how identical the game was, some five thousand kilometres apart.

My father described how he and his pals, small, skinny (the country was poor then) Malay and Chinese boys, running across roads, ignoring bicycles and the few cars, in their bid to be the first to the kite. I couldn't imagine doing the same now in Singapore, since the exact same roads are full of speeding cars. (My father, a Peranakan, grew up in the Katong area near the east coast of Singapore).

And here is an awesome video on how to make a Cambodian kite, using only a pair of scissors, BBQ sticks, fishing string, rubber bands, newspaper, and rice (as glue).


And one on how to fly a kite: