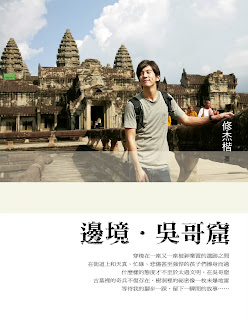 Xiu Jie Kai (修杰楷) is a Taiwanese actor who's acted in a number of supporting roles in "Idol Drama" (偶像劇). Idol drama is a genre of Taiwanese television shows that feature good looking leads ("idols"). The series target teenagers but hook also many housewives, not only in Taiwan, but throughout Asia, including Japan, the Philippines and Singapore. For this reason, the male leads are also known as "auntie killers" (師奶殺手).

It all started with "Meteor Garden" back in 2001, a Taiwanese dramatisation of the Japanese manga Hana Yori Dango or "Boys Over Flowers" which propelled the good-looking cast to fame and fortune.

They were showing the series on Chinese TV when I moved to Cambodia in 2006 and I was amazed that young Khmers all knew who F4 ("Flower 4", the name of the 4 boys) were. Our then guard, Boret, a young man who was the cousin of our landlord, told me he liked the spunky female lead, Shancai. Later I saw a music video on Cambodian telly, featuring four young men who sang a Khmer version of Meteor Garden's theme song.

Many Taiwanese visit Cambodia, something I did not realise, because I meet so few in the shop. Then I noticed quite a lot of traffic from Taiwan to my blog in October, during the time of the floods. They were coming from backpackers.com.tw where users had been discussing my post.

I do know there are Taiwanese who run businesses in Siem Reap, like the Bubble Tea shop near the Old Market area. The Wishing Well, a strange place for superstitious tourists to buy outrageously priced lucky charms "blessed by the highest monk" is also Taiwanese owned.

Xiu Jie Kai obviously loved Angkor enough to make a book of his photos. It's called "Border. Angkor Wat"《邊境。吳哥窟》. He has other interesting photos on his blog.

I also found this photo of Ariel Lin, a popular Taiwanese Idol, who posted this pic on her blog. It shows her with a Cambodian girl taken while she was here on holiday. Who's cuter? The one on the right, I think! 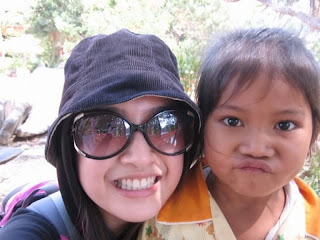