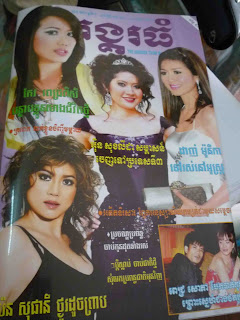 The other day Kagna was reading Angkor Thom magazine, a bestseller in Cambodia. I had written a "review" of one of the issues last June where I described the stories published. I see things have not changed... 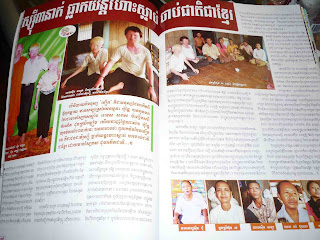 This story features a pair of albino brothers. Here is Angkor Thom's version: The brothers are reincarnated white people (!!!) 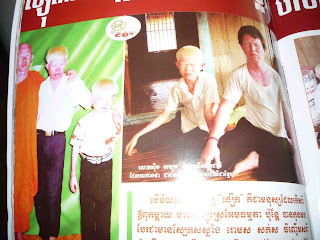 The monk was the first discovered reincarnated white person in that neighbourhood. The story is that he was a Russian who died in Cambodia and then re-incarnated in Cambodia (or some rubbish like that). 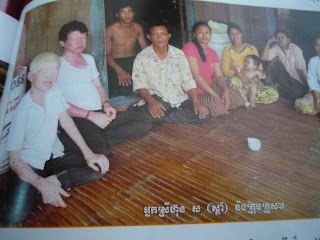 He was re-incarnated of course.

In a way I don't blame the rural people. How could they have any idea about albinism (a congenital disorder in which persons have an absence of pigment in the skin, hair and eyes because of a defect in an enzyme that is responsible for producing melanin). You would try to explain the situation somehow and a Russian plane crashing into the village and the Russians being re-incarnated, bursting out in their next life, as a whitish Khmer, would be one way...

But really, the publishers of Angkor Thom should know better - and I suspect they do. They just publish such nonsense in order to sell their rag. The thing is, Kagna actually believes the story, even after I explained about albinos to her and how they are found all over the world. 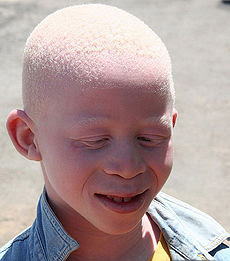 Here is a photo of an albino boy taken from http://en.wikipedia.org/wiki/Albinism. I explained how I knew an albino boy in primary school in Singapore and he had to keep out of the sun because lack of pigmentation makes people more susceptible to sunburn and skin cancers. The sun also hurt the boy's eyes.

Kagna said this was not the case in the Khmer-white boys, they can play in the sun and have no problems with their eyesight. Therefore, they are not albinos, but re-incarnated white people. Q.E.D.

I wish Angkor Thom would be more responsible and make use of its wide reach to teach people things instead of writing rubbish. They could use their influence to really educate the population, teach them things about nature and the world. Albinism is fascinating in itself. Why not write about this?

Then again, even supposedly educated USA has rags that talk about women giving birth to three headed monsters and this: 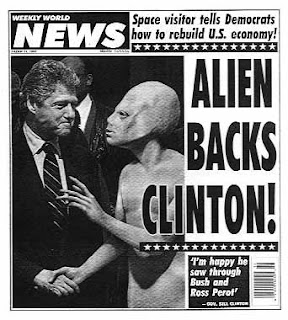 The Alien is a favourite story 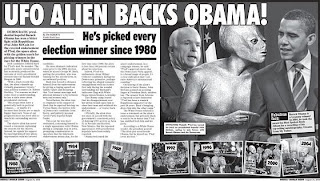 So he was wheeled out again for Obama.
Sigh.
Posted by Diana Saw at 9:34 am