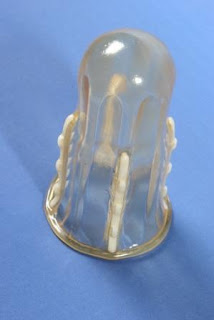 This bizarre device was invented by a South African woman, Sonette Ehlers.

RAPEX (TM) was developed to empower women to defend themselves against rapists. It also helps to identify the rapist, as it can be removed only surgically. See Rape Stop for more information. The prototype was launched in 2005 in South Africa. I tried searching online to see how popular the device is but could not find much information. I guess desperate times call for desperate measures. And how desperate is the situation?

In today's news from South Africa:
- Of every 25 men accused of raping a child or adult woman, 24 walk free - and one in every eight rape suspects is under the age of 17.
- Only 4.1 percent of reported rape cases resulted in a conviction.
- One out of every 10 child rape cases reported to the police resulted in a conviction. "Police rape study results drown victims' hope"

I tried to find the percentage of women raped in SA but you know what? The most recent SA government statistics on rape was in 2000. The government placed a moratorium on government crime statistics in 2001 stating that they needed "reassessment". Anyway these are the figures, which you can find here: Stats South Africa.gov

The report then cites the International Crime Statistics study (1996) by the International Criminal Police Organisation ICPO-Interpol which showed South Africa leading the world in rape with 50,481 cases reported to the police. Only the US has more reports, in absolute terms, with 95,769 cases. But the US has a much bigger population, so in terms of the number of rapes per 100,000 population, the figures are 36.1 for the US, and 119.5 for South Africa (so more than 3 times more than the US).

The Stats SA report concludes: "The figures obtained from the Victims of Crime survey in 1998 give a similar proportion [to the ICPO-Interpol study] if children are excluded. (page 28) [It means if children (below 18) are included, the statistics are even higher]

Of course these statistics are over a decade old, but as I've said, the SA government has stopped releasing data on the subject. For more updated statistics, I found these, compiled by Oprah Winfrey's team of researchers for her website:

"Instead of having made vast progress since 2000, dedicated (child rape) courts have declined in numbers; SAPS (South African Police Service) Family Violence, Child Protection and Sexual Offences Units have been redeployed; trained forensic social workers employed by the police have become quite scarce; (some) magistrates have become obstructive; the system of district surgeons was abolished (giving rise to a loss of expertise); and the need for training of all remains, with language barriers exacerbating every identified issue."

The South Africans have a term for recreational gang rape: "Jackrolling". The Cambodians too, have a name for it: "Bauk". A worker at AFESIP (a large anti-sex trafficking organisation here in Cambodia) once told me they picked up a teenage prostitute who had been gang-raped by 40 (yes, you read correctly) men and then left for dead around the upper riverside area in Phnom Penh.
Posted by Diana Saw at 1:54 pm