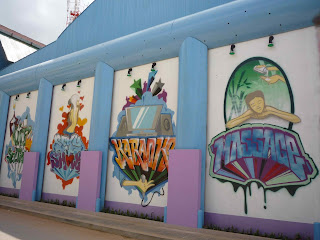 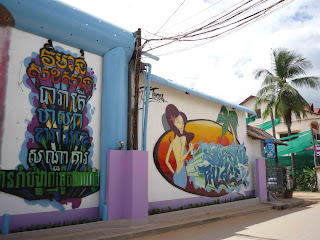 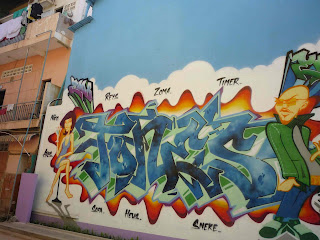 These walls were painted by Tony, a Khmer who was born in Switzerland. It took him about a month to finish the job. I like the art, I think it brightens up the place and is something unique for Cambodia.

Tony came to Cambodia to find out more about his culture. He is a tall lad and he tells me he is often mistaken for a Japanese. He can speak and read Khmer as he had learnt it from an old relative in Switzerland. He does not know much about the war here though, as his parents had left the country by then. They were Cambodian government scholars are were studying in France at that time. Today his mother is a chemist for the Swiss government.

Tony is a professional graffiti artist and he approached Sok San Palace for work. He told me he was paid over a grand for this particular job. In Switzerland, he charges 10 times that amount when companies commission his work. Tony wanted to spray paint the Bloom shop but I almost fainted when I heard his fees!
Posted by Diana Saw at 4:27 pm

Saw this wall when i was there.. Very cool oldschool style. Really nice bar with nice girls too :)