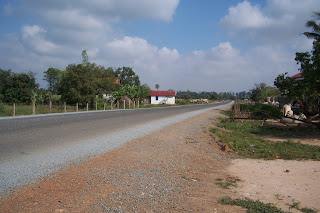 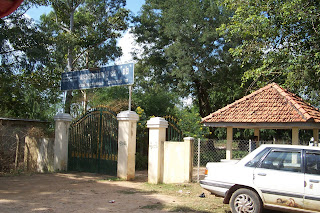 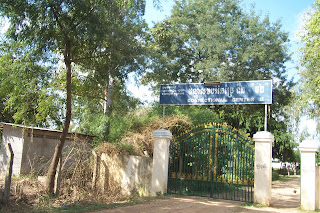 In November 2006, I accompanied my friend to Correctional Centre 2 -- the main prison in Cambodia for women and minors. The prison is located at Prey Sar, about 25 kms from Phnom Penh. We were taking a bunch of kids to see their mother in prison.

We took a tuktuk there and you can see the pictures I took when we arrived at the prison. We were told to wait when we got off the tuktuk because there was a big NGO that was making its rounds in the prison. We waited for an hour. When it appeared we'd have to keep waiting for an indefinite amount of time, our tuktuk driver suggested that the guards were playing mind games with us. They knew there are foreigners in the group and they were making us wait until we paid some money. The driver decided to speak with the prison officers. He went on his own inside the compound and an officer motioned for me to join him.

The two of us went inside the prison office which had three uniformed officers behind desks (including one woman). We were told to pay a fee which our driver negotiated down to USD20. He also had to register for us, using his Cambodian ID. They also needed a passport number from us (just one was enough). Thank goodness we had a reliable Cambodian with us that day. I believe we would have had to pay much more for the privilege of entering the prison otherwise. I was told later on by Cambodian friends that the "entrance fee" is usually just a few dollars.

Once inside, we were accompanied by an officer who took us to a waiting room. The place was neat and tidy and seemed clean. The mother finally appeared from behind a locked gate. She was thin but otherwise appeared healthy. Her children passed her some money and medicine. We sat talking under the supervision of guards, who stood at a distance but who nonetheless paid close attention to the exchange (especially of gifts). I wondered how much of the gifts she would have to share with the guards.

The meeting was subdued and the children cried when they saw their mother. We sat for about half an hour. Nobody bothered us and when it was over, we made our way out of the prison on our own.
Posted by Diana Saw at 3:20 pm

This is very sad. Last month (October) I too disguised as a visitor of a female prison at Correction Centre 2. I was writing a story about the deteriorating prison conditions for inmates there.

Thanks, you've got a nice blog.