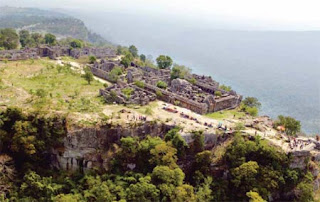 I cannot believe it but the armies of both countries actually opened fire yesterday over Preah Vihear! Two Cambodian soldiers died while four Thai soldiers were injured and ten captured by the Khmers. The Thai government has asked its nationals to leave Cambodia. No wonder Behind Bars restaurant here in Siem Reap was shut yesterday. The Thai owned cafe also employs a Thai cook who sits prominently behind a stall selling Thai and Khmer noodles. I wonder if the Dead Fish guesthouse and restaurant (same owners) are open?

My Khmer landlord told me some Khmers have left Siem Reap to head south to the capital Phnom Penh and people have asked her, "Why are you still in Siem Reap, why aren't you running away?"

It seems ridiculous to us foreigners living in Siem Reap, since Preah Vihear is some distance away, but obviously the war is still fresh in the minds of some Khmers and fighting anywhere in the country spooks them. They must be thinking of those days in 1975 when the Khmer Rouge won control of the countryside and instead of running away, people stayed in their homes in Phnom Penh, to disastrous consequences.

Anyway, why this fighting over a temple site? In a nutshell, never underestimate national or ethnic pride.

Cambodia, Thailand and Vietnam have had a long warring history and during the reign of King Ang Duong, from 1841-1860, Cambodia was under siege from both Vietnam and Siam (Thailand's other, and older name). Cambodian provinces of Battambang, Sisophon, and Siem Reap fell under Siam's rule. Because of the threat from its neighbours, King Ang Duong made contact with the French, asking for protection. This paved the way for France to establish a French Protectorate in 1863 which lasted for 90 years. "Siem Reap", for those of you who are not aware, means "Siam defeated" in the Cambodian language.

In 1907, the territories were given back to Cambodia, as part of the French-Siamese treaty. In 1962, the International Court of Justice judged Preah Vihear temple to belong to Cambodia but Thailand has never accepted this. In June this year, the UN listed Preah Vihear as a World Heritage Site and this reignited tensions.

Anyway, I found this site (by the US Muay Thai Association!) to be useful and interesting if you want to know more about the battles in the region, between Cambodia, Laos, Thailand, Vietnam - and France. www.usmta.com/Battles%20&%20Wars-7.htm