I've said this before: I love working at Bloom because I meet so many interesting people. Among the more memorable ones is Marianne, the vet to the king of Bhutan. A super cool French lady who is dedicating her life to animals in that closed kingdom.

Today, I met Kristina, who is from the US. Well, actually I met Kris a couple of weeks ago when she first bought a Bloom bag. Today is the third time she's been back for a Bloom bag and today we actually got to talk! I found out she and her husband, who have been teaching English in Korea, grew up in families that work for the Salvation Army in the US so are very socially conscious.

Kristina told me she would like to adopt instead of having her own biological children because there are so many orphans in this world already, so why produce more kids if you can help those already in this world and looking for a family?

She then told me about her cousin's project, called Gobena Coffee. It is an incredible story. Kris's cousin Danae had travelled to Ethiopia last year to adopt a baby. They found a daughter in an abandoned little girl who had been rescued by a 71 year old Ethiopian man and his wife (see picture). The man's name is Gobena, hence Gobena Coffee. 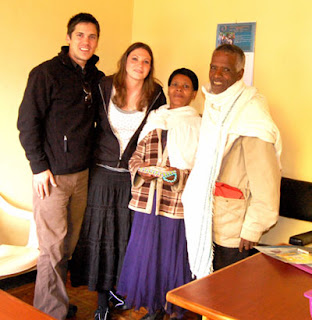 Gobena Coffee is based in Illinois in the US and the organisation says that 100% of the proceeds go to an Ethiopian program for orphaned and at-risk children. Check it out here on Gobena.org.
Posted by Diana Saw at 4:32 pm