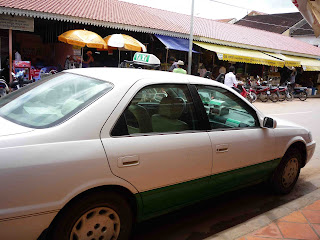 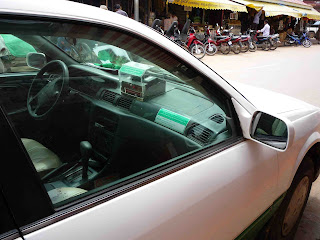 I saw this taxi the other day in Siem Reap. It looks just like the one Kerri and I took once in Phnom Penh. It was 11pm and Kerri's tuk-tuk had a flat. Instead of bargaining with the motodops, we decided to try the new taxi. We flagged one down near the Russian Market. At one point, Kerri put her hand on mine and whispered, "What does that 40.00 on the taxi meter mean? I hope it is not 40 dollars..." I asked the driver what it meant and he said "4000 riels". Phew. So it is 4000 riels, or USD1 when you board the taxi. By the time we arrived at Kerri's house, it cost us just under 6000 riels. We were so happy we paid him 8000 riels, or USD2. We were happy because we got to ride in air-conditioned comfort for an even cheaper price than we would have had to pay a tuk-tuk, or 2 motorbikes to take us home!

I think the taxi is worth taking for short distances but may be more expensive than a tuk-tuk for longer distances. More on the taxi services here:

Governor of Phnom Penh Kep Chutema said at the opening ceremony that Global Cambodia Trade Development Co. Ltd. generates new investment in the transportation field of the city by inaugurating the service.

"This is also the first time that metered taxi cars enter Cambodia and the company is highly committed to serving the customers well even the price of gasoline is a little bit high now, " he said.

"I strongly believe that it will have success because the price is reasonable," he added.

This investment, totally from China, also helps provide job opportunities for the local people as it needs human resources with professional skills, said the governor.

All the drivers should know at least two foreign languages, including Chinese, because they work for a Chinese company, he said.

"Greeting words are a necessity," he said, adding that the company's drivers all have official licenses, which can guarantee comfortable driving and least accidents.

Hu Guangxi, general manager of Global Cambodia Trade Development Co. Ltd., said that "we invest in the taxicab field in a long-term view. Cambodia has political stability and fast economic growth and Phnom Penh is the center of politics, commerce and culture of the country."

"We guarantee safety for clients and also buy insurance for them," he added.

Andre Lim, Hu's Cambodian partner, told Xinhua that the company will run only a dozen white taxis on the streets of Phnom Penh at the first phase and in late September the number will be up to 60.

Lim was confident that his service can compete with the traditional types of taxis in the city, like tuk-tuks (motorcycle with a trailer) and motorcycles, as market research told him that the people here are becoming richer and taxi cab turning into an affordable tool.

Public transportation like bus, subway and taxi cab has been absent here for years, as the city is small and the number of consumers is limited. One could only order a taxi car at the Phnom Penh International Airport in the suburb.

Meanwhile in the past three years, Cambodia embraced double digits of economic growth and more investors are coming in.

As skyscrapers started to be constructed one after another, Phnom Penh is marching towards modernization, just as the government planned.