Confucian Ethics, the family and charity 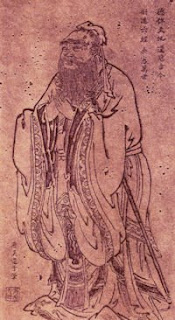 (Drawing of Confucius).
In case you're wondering why I have suddenly become so prolific in my blogging, it's cos I work in the Bloom shop in Siem Reap and it's been really quiet. I was talking to someone from a large organisation, easily the largest in Siem Reap, and he told me tourist arrivals for the month are down 25% compared with last year. Partly it has to do with the conflict with Thailand, partly to do with the global economy.

Still, I see a lot of elderly American tourists. A couple came in the other day and I swear, they were the oldest looking people I had ever seen. But they were still lucid, even if a little hard of hearing. These two women from California work with a women's group in Kenya. They teach the women to make beaded jewelry which they then sell in the US. The Kenyan women in this group have all got AIDS.

I was struck by how healthy these Americans looked--they must have been in their 70s, at least. Asians I find, tend to look young for a longer period of time, then suddenly we crash and look old. Westerners seem to age more gradually. Of course this is a generalisation. My second aunt has always been a beauty and still looks graceful even in her 60s.

The other thing that occurred to me is how these elderly Westerners spend their remaining years. The old people I know from home spend their time going on short holidays, playing mahjong, shopping, enjoying their grandchildren. Some, like my mother, do charity work, but it is often a hobby than a real commitment. Very few do what these Americans do. Part of the reason I think, is family relationships. Life revolves around the family much for for Asians than for Westerners.

It is in the teaching of Confucius (circa 551-479 BC) that family relationships is the basis of society. The five principal relationships that govern society according to him are: (1) ruler and subject; (2) father and son; (3) elder brother and younger brother; (4) husband and wife; and (5) friend and friend. Confucianism was the official philosophy of China for 2000 years and is entrenched wherever there are large settlements of Chinese, including Singapore. It also strongly influences North Asian culture. I recently met an English man who teaches English in Korea who believes Korea to be "the most Confucianist society".

For Confucius social order will come about when people learn to perform their familial roles properly. And the emperor's role was like that of a father, he would love his subjects as children and they in return would respect and be loyal to him. There is much discussion about Confucian ethics and its role in the economic success of the Asian Tigers. Here is one opinion. Fareed Zakaria was an editor at Newsweek International and managing editor at Foreign Affairs

"I remain skeptical. If culture is destiny, what explains a culture's failure in one era and success in another? If Confucianism explains the economic boom in East Asia today, does it not also explain that region's stagnation for four centuries? In fact, when East Asia seemed immutably poor, many scholars -- most famously Max Weber -- made precisely that case, arguing that Confucian-based cultures discouraged all the attributes necessary for success in capitalism.

"Today scholars explain how Confucianism emphasizes the essential traits for economic dynamism. Were Latin American countries to succeed in the next few decades, we shall surely read encomiums to Latin culture. I suspect that since we cannot find one simple answer to why certain societies succeed at certain times, we examine successful societies and search within their cultures for the seeds of success. Cultures being complex, one finds in them what one wants." FareedZakaria.com

Here is another one, from the perspective of a lecturer from Guam: www.cambodia.org

The only other thing I want to say now is the Confucian idea of filial piety: obedience to, respect for, and loyalty to one's parents. In fact, my mother said to me once after I moved to Cambodia, "shenme jiao rujia sixiang" ("what is Confucian ethics"). The thinking is that if I was a really filial daughter, I would stay by the side of my parents and take care of them. Even Cambodians have the same view of familial loyalty. So many of them have told me if they were me, they would spend all their money and time on their family, not on other people.

There is debate on whether the Confucian emphasis on the family excludes universal love, or love for mankind, but in this aspect, I am more inclined towards the teachings of Mozi (pronounced "Mor Tze", not "Mo Zee") 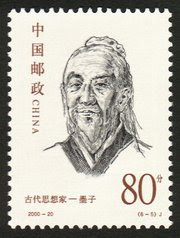 (Drawing of Mozi). Mozi argued that benevolence comes to human beings "as naturally as fire turns upward or water turns downward", with one important caveat--provided that persons in position of authority illustrate benevolence in their own lives. The foundational principle is that benevolence, as well as malevolence, is requited. (see Wikipedia's entry on Mozi for more

Here are quotes from the Analects, a compilation of Confucius' teachings:
4:20 Confucius said: "If, for three years (after your father's death) you don't alter his ways of doing things, you can certainly be called 'filial.'"

And this one where family members protect each other from the law:
13:18 The Duke of Sheh told Confucius: "In my land, there are Righteous men. If a father steals a sheep, the son will testify against him."

In Singapore, the law steps in to ensure filial piety, at least in its letter (not spirit). In Singapore, old people (60 and above) can sue their children for cash and care, under the Maintenance of Parents Act, passed in 1997. The courts often rule in favour of the parents. No wonder children are seen to be insurance policies where I come from. My mother often says to me if you don't have children, who will look after you in your old age? Well, I will.
Posted by Diana Saw at 12:43 pm