Collaboration on the Internet

I am finally able to have active links on my blog! Yay! I have not been adding active links cos Blogger's "link" icon does not work for some reason. So I end up just adding the entire URL but readers have to cut and paste the URLs onto their browser if they want to read the linked article.

But the other day I quoted wiseGEEK for the explanation of how broadband satellite works. The very next day I got an email from Catherine in the US who works for the company that owns wiseGeek. She thanked me for quoting them, but could I please put an active link to wiseGEEK?

I explained I was having problems and Catherine very kindly taught me the HTML coding for adding active links! It is exactly the same HTML coding which appears when I click on Blogger's "link" icon, but for some reason, manually typing it works but clicking on the icon doesn't.

Anyway the point is that Cambodia Calling will now be a better experience for readers. And all thanks to someone on the other side of the world.

This is what I love best about the Internet -- its potential for collaboration. An excellent example is Wikipedia, a collaborative effort where people all over the world share knowledge for free. Open Source Software, free software written and improved on by a community of programmers and developers, is another example. 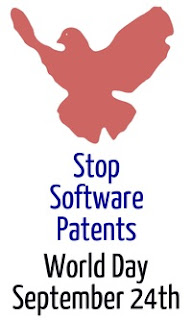 In fact, 24th September was World Day Against Software Patents. I joined many others in the petition because software patents have become so wide-reaching and trivial, it discourages innovation, especially from individuals and smaller companies.

Brussels, 2nd September 2008 — A global coalition of more than 80 software companies, associations and developers has declared the 24th of September to be the "World Day Against Software Patents". Five years ago, on 24 September 2003, the European Parliament adopted amendments to limit the scope of patent law and thereby protect small software companies from the harmful effects of broad and trivial software patents. A global petition asking to effectively stop software patents worldwide will be launched on 24 September 2008, together with specific additional requests for certain regions such as Europe, the United States or India....

...Marco Schulze, manager of Nightlabs, a professional supplier of ticketing solutions based in Freiburg, Germany, says: "Small Software companies cannot afford to go to court or pay damages. Who is this software patent system for?"

Jean-Paul Smets, founder of the Noepatents petition in 2000 and CEO of Nexedi software publication, considers that "European Union is the world most friendly region for software innovators. Unlike in the US, Software Entrepreneurs can focus on R&D and do not need to worry about the risks of costly patent litigations or absurd software patents trolls."

Richard Stallman, Founder of GNU Project and Free Software Foundation, says "Software patents are a threat to all software developers and all software users. Just one patent can ruin years of work, and no software project is safe: with each design decision, there is a chance you will step on a patent that will explode and destroy your project. To make software development safe for the developers and the users, we must abolish software patents."

Bruce Perens, creator of the Open Source Definition, and advisor to governments and industries, says "Software patents are a drag on innovation in the countries that have implemented them, vastly increasing the cost of producing real products in the proprietary software world because they replace innovation with litigation. But we're most concerned with them because they are entirely incompatible with Open Source, which is the strongest driver of innovation in software development today."

You can find out more about the impact of software patents on your life and how you can change this on the Foundation for a Free Information Infrastructure website.
Posted by Diana Saw at 12:29 pm