What happens to rubbish in Cambodia 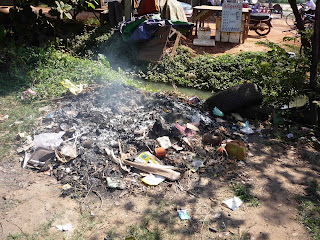 This is how rubbish is typically disposed of in Cambodia--burning. The Cambodians are indiscriminate about burning rubbish, they burn anything and everything. You can see there are cans, plastic and plastic bags being burnt. I especially hate the smell of burning plastic. It's toxic and I always have to go indoors when the neighbours start their burning in the evenings. I am even seriously considering not eating the fruit and vegetables from our garden because all that burnt plastic etc goes into the soil which is absorbed by the plants. Imagine eating the poison!

In Phnom Penh, it is CINTRI, a private company owned by CINTEC of Canada. CINTRI has the deal to collect rubbish in Phnom Penh for 49 years, beginning in 2002. In addition, CINTRI has signed a deal with the electricity body of Cambodia, EDC, to collect its rubbish collection bills via EDC's collection network. This means your rubbish collection fee is tacked on to your electricity bill. So as long as you have electricity, you will be charged for rubbish collection as well--no hiding there. We were charged the foreigner rate of USD20 in an area where locals paid between USD1 to USD5. When I complained to the landlord, he went to CINTRI who then explained that it was "villa" rate we were paying. However, I know for a fact our neighbouring villa-dwellers who are Khmer paid only USD5.

Someone I know compared these garbage collection companies to the Mafia. In the entry on the mafia, Wikipedia notes: According to historian Paolo Pezzino: "The Mafia is a kind of organized crime being active not only in several illegal fields, but also tending to exercise sovereignty functions – normally belonging to public authorities – over a specific territory..." (my italics).

Fed up of foreigner prices, we decided to start a compost in Siem Reap, and all organic waste goes there. The rest, like juice cartons and paper, are recycled into wallets and other accessories which we sell at Bloom. Milk bottles and cans are sold or given to the independent rubbish collectors who drag their wheelbarrows around the village. The rest, like glass bottles, which the collectors won't accept, we put into public bins in town.
Posted by Diana Saw at 4:00 pm

Composting orgaic "waste" is a great idea. I hope the rest of Siem Reap will follow likewise. Where is this compost center? I would love to see what you are doing.

Great idea about the compost -- what's the latest? Been able to keep them going, get locals to contribute to, in the past six months?

Hi, I think its great your organising a compost collection in Siem Reap. In Taiwan they collect compost in seperate bins with the normal garbage collection. I live in PP and I try to sort the garbage so that the independent collectors don't have to rifle through the icky stuff. wish i could organise a campaign to get eveyone to so the same.