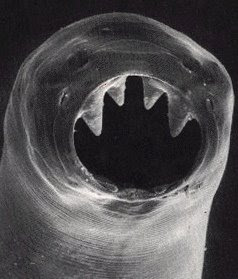 This is the Hookworm, so called because of its teeth, which hooks onto intestines, sucking out blood. Photo credit: Scienceblogs.com

Hookworms are endemic in Cambodia with a prevalence 20 -30%, according to this 2007 report.

On the BBC this morning, I watched a program on hookworms and how they infect farmers and children, who go around barefoot, in small villages in Brazil. The worms enter through the skin and stunts physical and mental growth. It can also cause anemia, and for the farmers in Brazil, infection means they feel tired and will not be able to work on their farms.

I am sure the situation is similar in Cambodia, where children routinely walk barefoot, even in the cities. I always used to tell Sipha's youngest daughter to put on her shoes when she joined us at the market. She never listened and her mother too, was not bothered. At that time, I did not even think of hookworms, just of infections, should she have a cut and pick up something nasty from the disgusting grounds of the wet markets, strewn with rotting vegetables and meat.

The poor farmers and people like Sipha probably would not even know what hit them, when they do get hookworms. The farmers in Brazil call the illness caused by hookworms, "Big Yellow", presumably because they turn pale and sallow from the blood loss.

While hookworm infection is rarely fatal, anemia can be significant. This is why in Cambodia, there is a focus on treating women. Almost half of Cambodian women of reproductive age (47%) and more than half of pregnant Cambodian women (57%) are anemic, according to the study linked above.

"The consequences of anemia in pregnancy are serious, reducing a woman’s ability to survive bleeding during and after delivery (postpartum hemorrhage). Anemia may result in premature or lowerbirth weight babies with a higher risk of death and cause weakness, fatigue and reduced physical ability to work. The amount of blood lost is directly proportional to the number of worms infecting the host. A moderate infection of hookworms approximately doubles the iron losses of a child or menstruating woman."

Even though the American Journal of Tropical Medicine and Hygiene reported a study on the low efficacy of Mebendazole against hookworms in Vietnam, in Cambodia, hookworm infection is treated, to some success, with Mebendazole:

"The prevalence of anemia decreased from 62% to 12% and from 57% to 26% in children 5 to 11 years of age in two rural primary schools in Kampot Province, Cambodia, after oral weekly supplementation with iron-folic acid tablets for 20 weeks and with vitamin A and mebendazole twice per year. In 12- to 15-year-old children, success was less marked. The prevalence of hookworm infestation did not change, but the number of eggs in the stool decreased drastically. The intervention had no significant influence on stunting and wasting. An integrated community approach including mass deworming, health education, and multi-micronutrient supplementation was very effective in reducing anemia in Cambodian schoolchildren and should be adopted on a larger scale." Abstract from here: Food Security and Nutrition Policy Support, German Technical Cooperation (GTZ)

One thing the authors failed to add was improved sanitation as part of the integrated approach to reducing anemia. As the BBC programme noted, doctors in Brazil are fighting an ongoing battle, so long as there are no proper toilets. Indeed, in the late 1800s and early 1900s, many people in Mississippi in the USA had hookworms because of the lack of proper sanitation facilities.

It should also be known that hookworms can also infect dogs, and while the canine variant rarely develop into adulthood in humans, you could get this from the lavae.

I was told by a healthcare person once that I should take de-worming tablets twice a year, so long as I am in Cambodia. Of course I forgot because worms aren't a big problem where I come from. But this morning, I popped two tablets of albendazole. I'm also going to buy the de-worming pills for the Bloom team and their children. I bought them some pills when I first arrived but they must need new ones now.
Posted by Diana Saw at 11:40 am