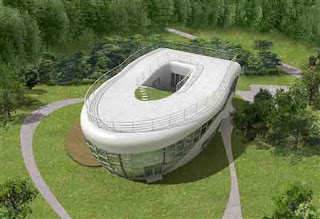 A toilet-shaped house in Suweon, named "Haewoojae" which means in Korean “a place of sanctuary where one can solve one’s worries“. Photo from freshome.com.

The Phnom Penh Post reported on Monday that poor sanitation costs up to 10,000 lives a year in Cambodia.

"Economic Impacts of Sanitation in Cambodia 2008", said that in 2005, only 22 percent of Cambodians had access to a latrine, and there were still "more than 11 million Cambodians living with an unimproved latrine or with no latrine at all". The problem is most pronounced in rural Cambodia, where 84 percent of the population lives, but only 16 percent of those can access adequate sanitation.

Yesterday, a Time article "Toilet Tales: Inside the World of Waste" reviewed a fantastic book written by British journalist, Rose George, entitled The Big Necessity: The Unmentionable World of Human Waste and Why It Matters:

"Toilets are a privilege that nearly half the world lacks. At least 2.6 billion people around the planet have no access to a toilet...not a public toilet, not an outhouse, not even a bucket. They defecate in public, contaminating food and drinking water, and the disease toll due to unsanitized human waste is staggering. George notes that 80% of the world's illnesses are caused by fecal matter: A single gram of feces can contain 10 million viruses, 1 million bacteria, 1,000 parasitic cysts and 100 worm eggs. The consequence is often diarrhea, which is a mere irritation in the West, but in the developing world a lethal condition that kills 2.2 million people a year — more than AIDS, tuberculosis or malaria."

George argues for sanitation to be put at the top of the agenda for global development, because untreated sewage often ends up poisoning the clean water in developed countries. In India, "untouchables" (Indians from a low caste) like one woman named Champaben who can only find work cleaning the country's dry, filthy latrines, regularly contract dysentery, giardiasis and brain fever from her exposure to human waste.

There are things we can do with human waste. Biogas, energy created from the fermentation of human waste, can be used as fuel for electricity and cooking fires and Toto of Japan, the maker of the world's most advanced toilets, even uses human waste as a marker of health--their toilets can check your blood pressure at the same time!

And this is Singaporean Jack Sim, a retired entrepreneur and one man dynamo who founded the WTO (World Toilet Organization) in 2001.

I remember how people laughed at him when it was reported that Sim had a personal mission to ensure the cleanliness of Singapore’s public toilets when he started the Restroom Association of Singapore in 1998.

Today, the WTO is a network of 151 organizations in 53 countries. In 2005, Sim worked in association with Singapore Polytechnic to found the world’s first ever toilet college to train people in toilet design, maintenance, cleaning, and eco-friendly sanitation technologies.

WTO declared Nov 19--today--"World Toilet Day" to highlight the desperate need of the 2.6 billion people in the world who need access to latrines.
Posted by Diana Saw at 12:14 pm