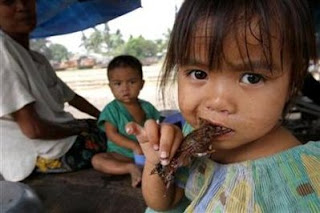 I found this article the other day. It's an example how people who know nothing about Cambodia get the wrong impression of the country from knowing just one nugget of information, in this case, that Cambodians eat "rat" meat. I am re-posting the entire op-ed article because it is revealing. I'll de-construct Mr Reyes' self-described de-construction of the report from Reuters.

"The price of rat meat has quadrupled in Cambodia this year as inflation has put other meat beyond the reach of poor people, officials said on Wednesday." [ Reuters ]

It will be illuminating to deconstruct this excerpt from the Reuters article.

The two words "other meat" jump out at me. It's chilling how the Reuters writer casually compares a rat carcass to other meat like chicken or beef. Is this a harbinger of things to come in our own country; will we one day ask the butcher if the rat meat is fresh?

It's not a few homeless Cambodians who survive by eating rats, rat meat is so common that people anxiously keep track of its price.

Cambodians are so desperate that they are willing to pay through the nose for rat meat. Cambodians don't complain that they have to resort to eating rat meat, they complain because it's so expensive.

At the risk of sounding politically-incorrect, let me declare that I will never dine at a Cambodian restaurant.

Robert Paul Reyes is a NewsBlaze writer on Politics, Pop Culture and Pointless Pontificating. Contact him by writing to NewsBlaze. To comment on this story, email to comment@newsblaze.com

Mr Reyes is correct to be chilled at Reuters' casual description of "rat" meat, given that the only "rat" meat Khmers eat are the meat of field mice from the countryside. There is a big difference between field mice who live in the countryside and the rats who live in the sewers of big cities here in Cambodia. Rats in the cities are vermin, eating rubbish and spreading diseases. Field mice eat grains, seeds and some plant roots (go look it up).

In reality, Cambodians do not generally eat mice meat. I have never seen mice meat sold in the markets in Phnom Penh or in Siem Reap. The Reuters article should have made clear the meat is found only in certain provinces, like Koh Thom, near Vietnam (where the Agriculture Official who was quoted, is from) or from Battambang (where the photograph above was taken by Reuters some years back).

I feel sorry for Mr Reyes who refuses to eat at a Cambodian restaurant because he's jumped to conclusions from reading just one news article (see the power of the written word? People will believe anything so long as it is in print).

Cambodian cooking can be quite subtle and delicious (I am thinking of amok). If he did his homework, Mr Reyes would know that fish is the number one meat in Cambodia, the one which every Cambodian eats and the one meat which Cambodians "anxiously keep track of its price". The kind of fresh fish meat that is sought after by Westerners who visit this country.
Posted by Diana Saw at 2:22 am

The guy is so ignorant. He was too quick to jump to a conclusion as if he were an expert on Cambodia.

Thank you so much for raising this up, Diana. I hope you have sent the guy your comment.

Great minds think alike! I went off on this guy on my blog a couple months ago:

Kekekekeke! Thanks Alison! Hope he gets the message that the world thinks he's a moron. No worries Mongkol, you can see from Alison (she's from the US-check out her great blog!) and my response that foreigners are all quick to jump to Cambodia's defense whenever necessary.