The American Dream Killed for these Cambodians 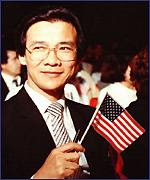 On Sunday night, Chou Ung, a 28-year-old Cambodian woman whose family had escaped the Khmer Rouge regime and had started a new life in Houston, Texas, was shot and killed while filling up at a Chevron station.

This reminds me of the actor Haing Ngor, who was tortured and survived Pol Pot's reign, only to be shot and killed outside his home in Los Angeles. Haing Ngor was shot because he refused to hand over a gold locket containing his late wife's photo (she had died during the Pol Pot regime), even after he had handed over his USD6000 Rolex watch. The robbers were three Asian men, from the Oriental LazyBoy gang.

Whenever people say Cambodia is dangerous to my American friend John Weeks, he points out the violence in the US. He tells me, with good reason, it seems, he feels safer in Cambodia than in the US.
Posted by Diana Saw at 8:10 pm