Moon closest to earth in 15 years 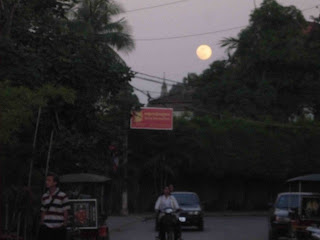 I took this photo on the night of Dec 12, when the moon was closest to earth in 15 years. At the time I took the photo I had no idea of this fact. I was just struck by how large the moon was and how bright. I was so entranced, I was almost hit by a tuk tuk!

The moon's orbit is elliptical, following an oval path and that night, it reached the point where this oval orbit is nearest to the Earth. According to NASA, the moon on that night was 14% bigger and 30% brighter than other full moons this year, as reported by the BBC.
Posted by Diana Saw at 3:39 pm