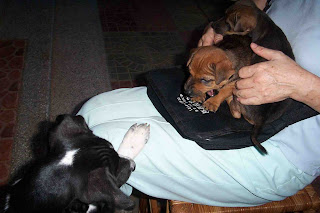 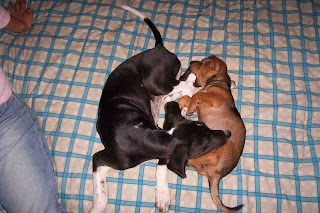 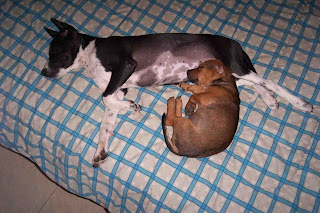 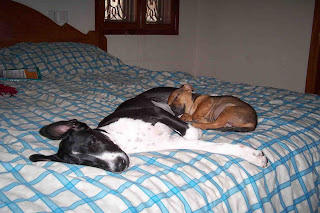 The first dog I had in Cambodia is Austin, given to me by my neighbour. He was named after Austin Powers, haha. Austin is close to three years now and is a real sweetie. One tuk tuk driver who dropped a friend off at our place asked me for him, because Austin was jumping up and licking him, a total stranger, all over! Anyway, back in 2006, we decided that it'd be nice for him have some company, so we adopted Nessie (short for Vanessa, girlfriend of Austin Powers in the original movie).

They became great friends, even though Nessie was tiny, compared with Austin. She's hilarious, always pouncing and playing with Austin. Our dogs are mongrels and very smart. The vet told us Austin has whippet and dalmation blood while Nessie is a miniature daschund mix. I can only imagine there were all sorts of pedigree dogs back in the days where Cambodia was ruled by the French who probably imported dogs. There are more and more pedigrees now, mostly imported from Thailand. And many more backyard breeders, since a labrador puppy, for example, can fetch USD300 in this country.

They were so close. Nessie would sleep on Austin's tummy. They were so close, they became parents! That's right! Austin and Nessie have three puppies, so now we have a family of dogs! I'll post pics of the puppies another time. Anyway, we love our dogs and have no plans to leave them should we leave the country. In fact, we plan to buy a car and drive our family should we decide to leave Cambodia and move to Thailand or Malaysia.
Posted by Diana Saw at 4:28 pm