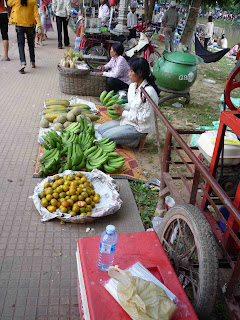 Fruit sold on the street as snacks during the water festival. Foreigners are often surprised that unlike the West, in Cambodia, you cannot buy just a banana or two. You have to buy the entire bunch. I always found it funny watching the sellers scold foreigners in Khmer, when the foreigners tried to break off a couple of bananas from the bunch. The hapless tourists had no idea what was going on, and the Khmer women who sell the bananas get puzzled and angry at what they saw was the foreigner's attempt to "spoil" their goods. Anyway, if you plan to buy bananas here, just take the whole bunch--it's 1500 riels (30 cents US). And if you cannot finish eating all, give the rest to poor people you meet. 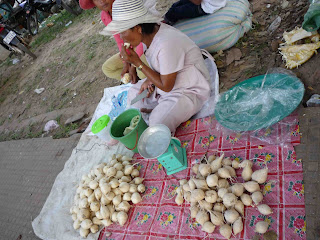 Raw turnips being sold by the kilo on the street. They are fresh and crunchy, just like apples! 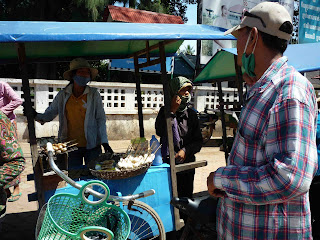 Grilled bananas. They are coated with sugar water and grilled. The outside becomes sticky and hard. I think raw bananas actually taste better. It costs just 500 riels for a stick of three small bananas. 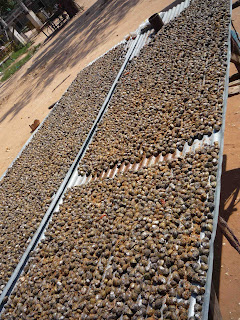 These are clams which are "cooked" by baking in the sun on large zinc sheets. You can also get chillied ones. It tastes like the sea, and I could not eat it. It was so funny, my friend from New Zealand and I both spat it out when we tried it at the insistence of a Khmer shopkeeper. Sometimes you see larger shellfish and I've also tried that, but they all have the same salt-water taste. 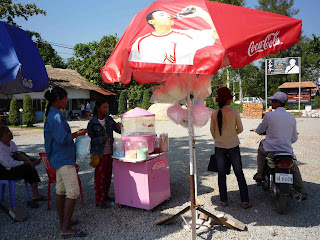 And finally, cotton candy, which I saw on National Road Number 6. It is spun by a small machine and costs 2000 riels (US50 cents) a packet.
Posted by Diana Saw at 4:02 pm