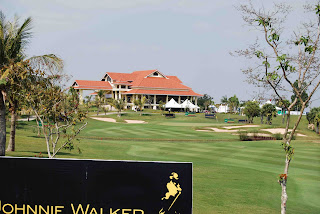 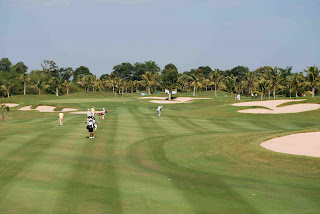 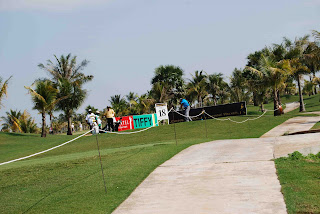 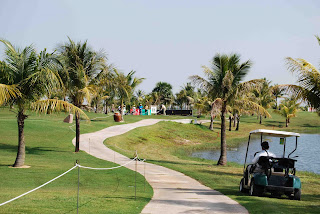 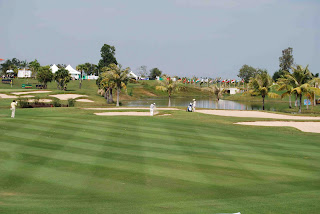 I've finally found photos from last year's inaugural US$300,000 Johnnie Walker Cambodian Open. It was played in November at the newly opened Phokeethra Country Club here in Siem Reap. The club is managed by the Sofitel Hotel.

My partner Alan went to watch the game. It was funny listening to him tell me about the outing. First of all, the Johnnie Walker sponsored bus which was to take spectators to the course was empty except for Alan and the Western woman who was part of the organising team (maybe in charge of PR?). So much for interest in the game! You can see there are no spectators on the course at all.

The Phnom Penh Post reports a new one will open on 14th Dec on the road to Phnom Penh. The Siem Reap Lake Resort Golf Club is owned by KTC Leisure, a Korean company. The Post reports that golf here is played mainly by Koreans, so executives at the other clubs are worried about the new competitor.

At least four more luxury courses are now in various stages of construction, says the AFP in a Dec 3 article titled "Cambodia's golf plans now face financial hurdles". The article says so beloved is golf, Cambodia's senate has its own nine-hole course. The leaders of this country have also approved plans for a luxury golf course in Bokor national park, a protected wildlife area. And "Prime Minister Hun Sen's golf scores are posted on his cabinet website, even though he has a handicap of 15."
Posted by Diana Saw at 3:10 pm