Toxic dump in Sihanoukville in 1998 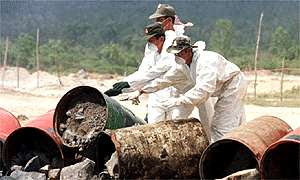 While researching Sihanoukville, I came across this piece of news. On Nov 30, 1998, 3,000 tons of toxic waste were imported from Taiwan's Formosa Plastics and dumped four days later in Batrang Sub-district, Prey Nob District, Sihanoukville, about 15 kilometers from Sihanoukville town.

An uproar followed after six people died. According to the BBC four people were also killed in traffic accidents as thousands of residents fled the province. All the waste was shipped back to Taiwan four months later, and Formosa Plastic apologised to the country.

This interesting report estimated at least 100 officials to be involved in the import of the toxic waste:

"One unidentified high ranking official is said to have received US$ 300,000 in bribes. According to many newspapers, a US$3 million bribe had been paid to officials to allow the waste from Taiwan into Cambodia. The government blamed unidentified government officials and port authorities for letting the waste into the country."

"The interesting thing is that dock workers and villagers were not initially aware that their sickness may have been because of the waste. However, two cases that triggered this issue for our team. were the deaths of two pigs and many rats in Phou Theung and Chham Notream villages. The pigs died after rooting in the pile of rubble wastes that the pig owner had gathered from the dumpsite. The owner did not say whether he sold the pork! The rats died after nibbling the pile of sacks that another family had kept inside their house. Later, they realized that the waste must contain some poisonous elements that had killed the rats. The children in this house also became sick after playing with the sacks. So, based on these experiences, the villagers came to the conclusion that the people had died or got sick because of the toxic wastes."

"The affected respondents who treated themselves without advice say it is because they do not have enough money. Buying drugs and using them is the best cheapest way, and what they always do when they become sick. The people who approached the clinics are mostly better off. Some people in the villages use herbal medicines such as Rainsap to cure the diseases, especially those did not have enough money to buy drugs."

Thankfully there has been no more reports on toxic waste dumping on Cambodia, as far as I could find. I did find out that last month, Ho Chi Minh City police discovered a dump site that had been receiving toxic waste from a leather tanning company. The dump site reportedly earned VND1.8-5 million (US$105- 300) per ton from receiving the company’s waste.
Posted by Diana Saw at 5:32 pm