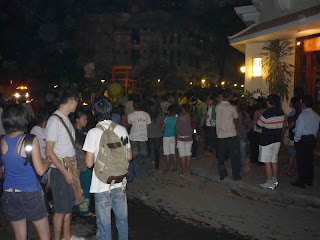 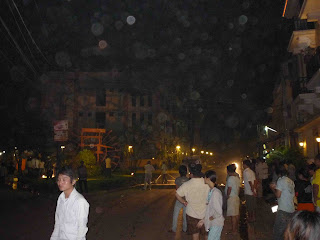 There was some drama on the 23rd of December: a shopping centre (one of two in Siem Reap that has escalators) caught fire, due to an electrical fault. At the time, I was having dinner with Alan and Jim, the Australian who lives on boats at India Gate restaurant on Sivatha. We heard the siren screams and saw two fire engines go by. The owner of the restaurant told us about the fire.

After dinner, at around 9pm, we walked to see for ourselves. By then the fire, which has started a half an hour ago, had been put out (by seven fire engines, it seems). All we saw were many people milling about and black smoke rising from the third floor of the building.

I apologise for the lousy photos--I have been having problems with my camera, but only for night shots, when I get many round spots on the photos. I looked this problem up online at forum.digitalcamerareview.com and found that: "Those spots are most likely caused by a lot of dust in the air. The light reflects off of them causing them to show up as spots. Because of the difference in distance between them and the actual point of focus (they are close to the lens while the point of focus is the wall in front), they are rendered as discs of light of different transparencies. This is a common "spirit orb" phenomenon in "ghost hunting"."

Siem Reap is an incredibly dusty place, and it is worse during the dry season. No wonder I never had this problem until recently.

Anyway here is the report by the Phnom Penh Post on the fire. It seems fire police shot at the glass in order to make holes for water to be sprayed in, something I don't quite believe.

A FIRE Tuesday night devastated the third floor of the Angkor Trade Centre in Siem Reap, causing a large crowd to gather and watch as firemen doused the building with water.

The fire began at about 8:30pm and was caused by an electrical malfunction on the centre's third floor, which has recently undergone substantial extensions and renovations, sources in the Siem Reap Fire Department told the Post.

Meas San, chief of the Fire Unit at the Siem Reap Police Department, said seven firetrucks were called to the scene, and efforts to extinguish the blaze were coordinated by authorities from the commune, province and the governor's office.

A woman who owns a shop inside the centre, which includes a supermarket and a Swenson's ice cream shop, was caught in the fire and suffered emotional trauma after fleeing the burning building, Meas San said, adding that the woman was taken to a clinic but suffered no physical injuries.

Future uncertain
The Angkor Trade Centre remained closed on Wednesday, and its reopening will depend on individual shop owners, Meas San said.

Ke Sovannipsey, a local resident who arrived on the scene as flames erupted on the centre's third floor, said he saw fire officials shoot their guns at windows on the third floor so that water could be sprayed into the building.