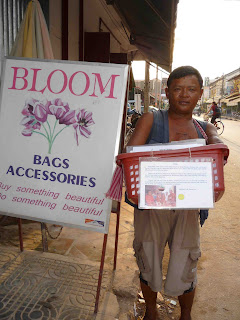 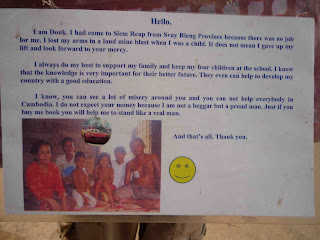 I have lived in Siem Reap for more than a year now. When I first moved here, I used to see this Cambodian man, short and stout, with no forearms, walking around the Old Market area, trying to sell books to tourists.

I wasn't friendly in the beginning, because I did not have a good experience with the handicapped and child book sellers in Phnom Penh. The worst of them were abusive when you did not buy from them and the best of them were, well, users.

So I had no desire to get to know another Cambodian book seller who had no interest in me, the way I took an interest in him or her, but who only wanted to me to buy his or her goods. (I am that way now, I don't go out of my way to find out about poor-looking Cambodians and figure out how to help them. I keep to myself and try to focus on helping the Cambodians who work at Bloom).

I don't know if Douk is the same as the rest, but I started talking to him about six months ago when my mom was here and she nudged me to buy a book from Douk because she pitied him.

After that, I would buy him soft drinks because I saw he liked them. Then one day, I decided I would try to do more for him. I told him he should sell bestsellers, not only touristy books, because all the booksellers on the streets sell Angkor Wat and Cambodia books. No one sells bestsellers and he'd have an edge.

I gave him a book I had read recently and which I did not want to keep (I am normally very possessive of my books and find it hard to part with them). The book was "Eat, Pray, Love" by Elizabeth Gilbert. I told him to use this as an experiment. He sold it the same day.

Douk then came looking for me, asking me how much I wanted in commission from the sale of the book. What? I said. No, no, it's for you, I gave it to you, for you to test the market. Anyway, after that we went around town trying to find bestsellers for him to sell but it's not that easy in this town. We found shops that wanted to sell us some but at too high a price.

Then two weeks ago I suggested he leave a basket of books at the Bloom shop. I had decided would give him shelf space for the books. And Chhun Hy (our shop assistant) and I would sell for him for free. I wanted to help him because the basket he slings around his neck is very heavy. Honestly I could not even lift it when I tried. Poor Douk must suffer from terrible neck and shoulder aches.

You can read Douk's story if you click on the second photo. He has four children and he works hard to take care of them. I respect him because even though he is a landmine victim, he does not beg. He sells books and joins a Cambodian band at night on Pub Street (It's not guitars and drums! It's Cambodian music with pipe and xylophone-like instruments.)

"I know you see a lot of misery around you and you cannot help everybody in Cambodia," it says on his sign. "I do not expect your money because I am not a beggar but a proud man. If you buy my book, you will help me to stand like a real man."

Exactly what I am trying to do with Bloom--I want to help Cambodians stand up for themselves by selling bags that people want to buy instead of simply asking for charity and donations. And for this I need to set an example, which is why I set Bloom up as a social enterprise with my own money, instead of setting it up as an NGO with other people's money.
Posted by Diana Saw at 5:10 pm

You have changed my perspective on Douk. When I first encountered him in Siem Reap I was cynical, for some reason, and wouldn't have ever bought a book from him. I bought from the Frenchmen who ran a shop in the Pub Street vicinity instead. He told me he lived in Cambodia because it was an 'easy life.'

I now feel a little ashamed. When next in Siem Reap I will definitely seek Douk out.

Hi Luke, yes I know what you mean. It's easy to get cynical in this country. I catch myself thinking cynical thoughts all the time. It's really sad when I think about it, like how when I first arrived here i was all idealistic and had all these ideas about helping. I keep thinking the last thing I want is to leave Cambodia an old, cynical, bitter woman!

So I try my best to be more optimistic and open-minded, but I'm not very successful I'm afraid. A twenty-something Singapore civil servant actually said to me I need a "reset" button. Haha.

Do keep an eye out for Douk. He's a really cool guy, not wanting to beg despite his landmine injuries.