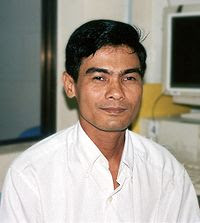 This is Chea Vichea, the leader of the Free Trade Union of Workers of the Kingdom of Cambodia (FTUWKC) until his assassination on Chinese New Year, 22 January 2004.

Vichea was shot in the head and chest. He had recently been dismissed by INSM Garment Factory in Phnom Penh for helping to establish a trade union at the company. He also had close affiliations with the opposition Sam Rainsy Party. 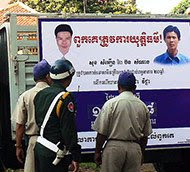 And these are Born Samnang and Sok Sam Oeun, the men whom Amnesty International and Human Rights Watch say have been wrongly convicted of the murder. The two men have alibis and say they were tortured into confessing to the crime. They were sentenced to 20 years in prison and had to compensate Chea Vichea's family $5000 each. The family turned down the compensation because they did not believe the men were the killers.

The first judge threw out the charges against the two men, citing a lack of evidence against them and weak credibility of the police investigation. The very next day, he was removed from his position at the Phnom Penh Municipal Court, and his decision overturned.

Now there is a new documentary Who Killed Chea Vichea? You can watch a two minute trailer of the movie here.
Posted by Diana Saw at 5:15 pm